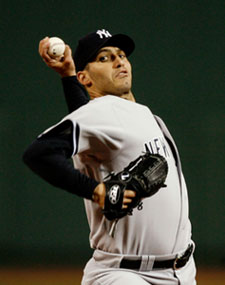 Andy Pettitte is a cheater. He confirmed this yesterday when he apologized for and admitted to using HGH. In a statement issued yesterday, Pettitte said that he used human growth hormone on two occasions, both to recover from a 2002 elbow injury and not for performance enhancement reasons.

"In 2002 I was injured. I had heard that human growth hormone could promote faster healing for my elbow. I felt an obligation to get back to my team as soon as possible. For this reason, and only this reason, for two days I tried human growth hormone. Though it was not against baseball rules, I was not comfortable with what I was doing, so I stopped. This is it - two days out of my life; two days out of my entire career, when I was injured and on the disabled list.

If what I did was an error in judgment on my part, I apologize. I accept responsibility for those two days. Everything else written or said about me knowingly using illegal drugs is nonsense, wrong and hurtful. I have the utmost respect for baseball and have always tried to live my life in a way that would be honorable. I wasn’t looking for an edge; I was looking to heal."

Now some people applaud his apology, others decry it, but the real question is what happens next?

Roger Clemens takes the biggest hit from all of this. Pettitte’s statement confirms the accusation of Brian McNamee against him. McNamee also accused Clemens of using steroids and HGH and now his claims become more credible.

But, Pettitte’s apology does more than thrust the spotlight further onto Clemens, it creates a standard for other athletes. If Pettitte is “forgiven” by the fans, the chances are more athletes named in the Mitchell Report will follow his example and admit their guilt. If there is a backlash against Andy, expect athletes to denounce the report and the accusations as made up.

To be fair, Pettitte is probably not a Hall of Fame candidate and therefore didn’t have as much to lose as Clemens. But, in an age where Mark McGwire tells Congress “he isn’t here to talk about the past” and Jason Giambi offers an “apology” without admitting guilt, Pettitte’s candor is refreshing. It’s just too bad he felt the need to cheat in the first place.