Peter Braunstein is Happy to be Behind Bars 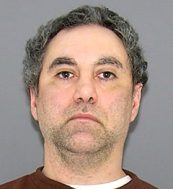 If anyone has been curious about convicted journalist-turned-sex attacker Peter Braunstein, wonder no more. The Daily News interviewed the "fake fireman sicko" in an Ohio prison and learned he's actually pretty content.

Braunstein, who was sentenced to 20 years in prison for posing as a firefighter, holding a work colleague captive in her apartment, and sexually abusing her for 13 hours in 2005, is in Cincinnati to face robbery charges (while on the run, he stole a psychologist's credit card):

I think I'm the only guy [incarcerated] who wouldn't want to get out..

I would have no desire to try to rehabilitate myself and go back to being a guy with a job and meeting girls and having friends. I'm not interested in that whatsoever...

All I would do is go on some insane homicidal rampage. It wouldn't be good for society for me to get out. It might be good for me, though. It would probably provide some kind of cathartic relief.

However, Braunstein wants to head back to his NY prison, if only for his prison pen pal--"She's one of those convict groupies. She sends photos. Apparently she's into body piercing."

This is not the first strange jailhouse interview Braunstein has given; shortly after his conviction, he told the NY Post things like, "I often have fantasies of doing a Columbine-like killing at a Scientologist church." The Manhattan jury that convicted him never believed his defense claim of being mentally ill.

#attack
#crime
#fake firefighter
#peter braunstein
Do you know the scoop? Comment below or Send us a Tip