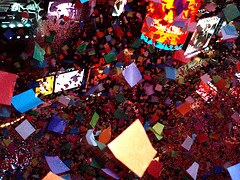 2008 is almost here, the ball drop is turning 100, the 8 is going to make its big debut, the year's bad memories have been shredded...so there's just one thing left to do. This year messages, wishes, resolutions and probably some nonsense will flutter to the ground when the clock strikes midnight. And you can join in the fun.

For the first year ever, people worldwide can write messages on the confetti that will fly around Times Square. The AP tells us "anyone can get a message printed on a piece of the multicolored confetti by visiting the Times Square Information Center or by using the Internet to type a message on the online Wishing Wall. The message-carrying pieces will be mixed among the more than one ton of confetti." If you'd like to get a message out there but can't make it to "the center of the universe", go here for the online option. We wonder how many people will use it as a way to promote something (after all, the idea took root from last year's Target word-fetti campaign).

Just who is responsible for that confetti being tossed into the air? It's not a machine, actual people (ahem, "confetti dispersal engineers") dump the paper out the windows of dozens of buildings (last year they littered Times Square from 6pm on). The big night is prepared for by a series of air-worthiness tests, one of which you can watch here. Fun fact: rectangular confetti gets the most "float time"!