The rain, the record high voter turnout, a scanner shortage, a two-page ballot, and poorly-trained poll workers may have made things worse for thousands of New Yorkers on midterm Election Day. But ultimately the chaos stemmed from one obscure state law, experts and New York City Board of Elections officials testified Tuesday.

Section 7-106 of New York State election law requires that all ballots be “perforated,” which meant that on Election Day, New York City’s two-page ballot had to be torn from a pad at the polling site and then voters themselves had to make a second tear, to separate the two pages. The law was written for lever machines, so each tear created a jagged edge and tiny shards of paper dust—a combination that causes electronic voting scanners to malfunction.

“The experts tell me that it’s the perforation that’s the problem,” New York City Board of Elections Executive Director Michael Ryan said during nearly four hours of testimony before the City Council Tuesday. “That is a simple legislative fix.”

One of those experts confirmed Ryan’s claims: Judd Ryan, the Senior Vice President of Elections Systems and Software which makes the DS200 scanners used in the city’s election.

“Because this scenario has never been contemplated by our company, or any of our customers, the system in place in New York City was never designed to accept 34 to 38 inch ballots with two perforated edges,” he said. He added that they’ve used 2-page ballots, 19-inch-long ballots, on rainy days and in high humidity areas and never seen this level of scanner malfunction.

Across the city on Election Day, the BOE received nearly 10,000 calls for broken scanners and ballot jams, Michael Ryan, the BOE head, testified.

That’s five times as many as during the 2016 presidential election, where there were under 2,000 calls for jams citywide, according to a 2016 report, though nearly a million more New Yorkers cast ballots that year.

Topping the city for complaints was Brooklyn, the city’s most populous borough, where 3,362 calls came in over the course of the day. Manhattan came in second with 2,284 calls. Queens, the Bronx and Staten Island followed with 1,914, 1,798 and 428 calls respectively, according to Ryan.

Across the city there were 4,054 scanners deployed, so presumably the Board of Elections got multiple calls for the same scanner throughout the day.

It took technicians an average of 52 minutes to respond to complaints across the boroughs, with the longest waits in Brooklyn, where it took around an hour and fifteen minutes to clear up each jam, Ryan said.

Though Board of Elections officials had first tried to downplay scanner malfunctions as anecdotal because of social media posts and high turnout, officials finally conceded Tuesday that the frequency of scanner malfunctions was “at a rate not experienced in any election since the use of DS-200 scanners began in 2010,” Ryan said during his testimony.

"At what point did I know we were in trouble? It was about 6 o'clock in the morning,” Ryan added. 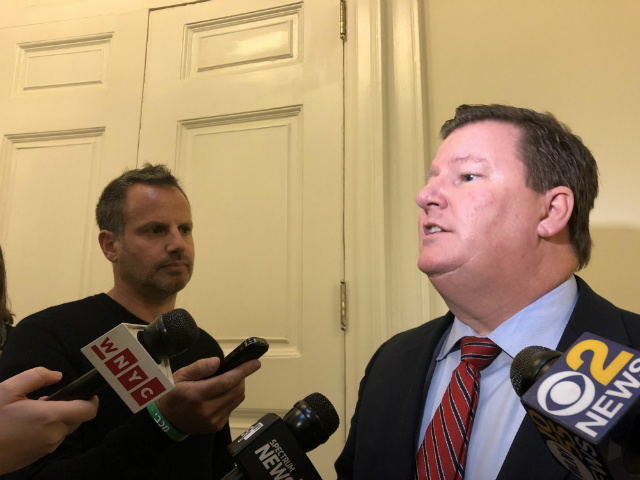 Michael Ryan, the head of the Board of Elections, talking to reporters after Tuesday's hearing at City Hall (Gwynne Hogan / Gothamist)

Ryan also revealed that the only training that most poll workers got on how to deal with the city’s first ever 2-page, double-sided ballot was a robocall leading up to the election telling them to watch an instructional video.

“A robocall was sent to all assigned poll workers directing them to view the video as time did not permit retraining over 34,000 workers less than four weeks before Election Day,” Ryan said, later clarifying after his testimony, that poll site coordinators did get additional training on the new ballots.

The video that poll workers were directed to view was the same one Board officials had to yank offline briefly after it drew criticism for showing a voter filling out a bubble for New York Governor Andrew Cuomo, the New York Post reported.

But when pressed by Bronx City Councilman Ritchie Torres as to whether the the Board planned to replace the scanners before the 2020 presidential elections, he demurred.

“If we have the money and it makes fiscally-prudent sense to not try and extend the life cycle,” he said. “It will be a balancing act.”

Judd Ryan from Elections Systems and Software refuted Michael Ryan’s claims on the age of scanners and that they were only useful for 10 years.

During the course of Tuesday’s hearing, BOE head Michael Ryan refused to make specific commitments on how operations would change going forward, beyond saying more poll workers would be trained on cleaning routine scanner jams.

They’re working to certify election results, and will begin a complete review of what happened once that’s over, he said. And he declined to comment on City Council Speaker Corey Johnson again calling for him to resign.

“The bottom line is the frustration of the voters was real. All of these technical issues off to the side that we all like to get hung up on, need to be put to bed, we talked about them,” he said, speaking to reporters following the hearing. “Now we have to come up with a game plan moving forward.”

#ballot scanners
#Board of Elections
#election 2018
#scanners
#voting
#original
Do you know the scoop? Comment below or Send us a Tip