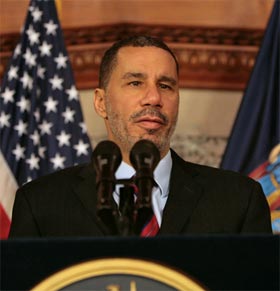 Governor Paterson issued a memo telling all state agencies to recognize legally performed, out-of-state same-sex marriages as valid marriages. This memo was, based on the February Appellate Court ruling, said gay marriages "should be afforded the same recognition as any other legally performed union."

Assemblyman Daniel O'Donnell said, "Very shortly, there will be hundreds and hundreds and hundreds, and probably thousands and thousands and thousands of gay people who have their marriages recognized by the state." But some critics say that Paterson was essentially circumventing the State Legislature, which has not passed previous attempt to allow gay marriage. Conservative Party head Michael Long accused Paterson of "destroying the fabric of marriage."

According to the Times-Union, there could "as many as 1,300 statutes and regulations" that will need to be revised, like "joint filing of income tax returns" and "transferring fishing licenses between spouses." Two interesting facts: The memo was dated a day before California's gay rights ruling and this will make NY the only state to recognize gay marriages but not allow them to be performed in state.

And mark your calendars: June 17 is when couples can obtain same-sex marriage licenses in California, which is a day later than county officials originally thought.

#gay marriage
#gay rights
#governor paterson
#same sex marriage
#state legislature
Do you know the scoop? Comment below or Send us a Tip
A new Gothamist is coming! We’ve moved comments over to our beta site. Click here to join the conversation and get a preview of our new website.