On Tuesday, hundreds of tenant activists converged on Albany to lobby for a package of nine bills that could strengthen protections for the city’s one million rent stabilized tenants, and expand protections across New York State.

Rena Marslin, 58, used a vacation day to travel from Valley Stream, Long Island, to join the rally. She said she takes care of her mother and has had a tough time finding her own housing.

“My apartment in Williamsburg was bad—crumbling paint and rats and roaches—I had to move in with my mother in 2017. I have to fight for my rights. If I don’t, who’s going to do it for me?”

Anthony G., 63, from Jamaica, Queens, met the bus to Albany near Atlantic Avenue. “I got up at three in the morning today," he told Gothamist.

“I’ve been through the nonsense that these landlords are pulling, and I can’t stand to see anyone else go through it," he said. "I’ve lived in a place where I was laying in my bed and the ceiling collapsed. I’ve lived in other places where the landlords decided they were going to do construction and tear the place up so that I couldn’t live in it.”

He added, “I’ve seen a lot, and that’s what makes me want to stand up. It’s going on, and people are living through deplorable conditions. People need to stand up and fight.”

Seven of the pending bills would close loopholes that allow landlords to boost rents in vacant apartments in order to deregulate them. Another would allow municipalities across the state to opt into rent stabilization, while the most contentious bill, sponsored by Brooklyn's freshman State Senator Julia Salazar, would prohibit eviction without a “good cause”—such as not paying rent—except in very small owner-occupied buildings and a few other unique circumstances. It would also expand tenant protections statewide, including to buildings of less than six apartments, which are not currently covered by rent stabilization.

While the governor has expressed support for repeals to vacancy decontrol and preferential rents, he has been less sanguine on statewide rent stabilization efforts, and the "good cause" bill. 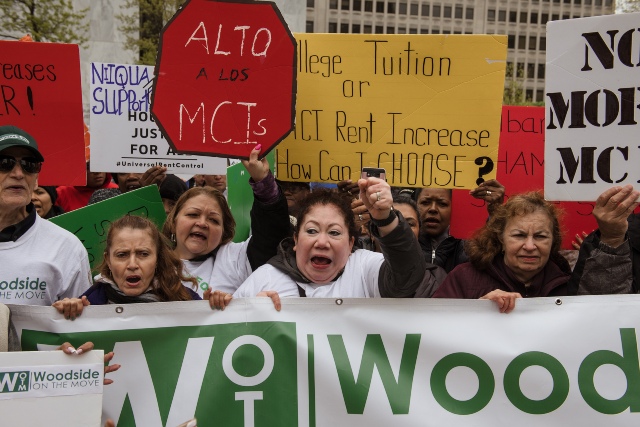 “We get left behind all too often," Rashida Tyler of the Kingston Tenants Union told us. "Upstate is always the last to get any kind of relief and we’re suffering up here. We don’t pay the same rents they do in New York City, but upstate we’re rent-burdened. In Kingston, over fifty percent of the population is rent burdened. They’re paying over thirty percent of their incomes in rent.”

John Furman, 61, is the president of Central New York Citizens in Action. He traveled from Utica to make it to Tenant Tuesday.

Furman said he believed that the state representatives were too beholden to the real estate industry to enact substantive reforms, which is why he was in Albany on Tuesday.

“The Democrats, particularly upstate Democrats, do not have enough courage and guts. They act too much like corporate Democrats, beholden to landlords and real estate interests," Furman said. "It’s going to be a tough fight, but I think we’ll win it. We have to shake up the system and give everybody a fair opportunity to be involved.”

Joseph Cegielski is an immediate treatment assistant at Mercy Hospital in Buffalo. He was in Albany with nurses to lobby for safe staffing and more funding for hospitals across the state before the state legislative session ends in June.

When asked about the connection between housing and healthcare, he saw common cause with the tenants activists. “It’s all a matter of health and well-being, it’s humanity.”

#Albany
#rent laws
#rent reform
#universal rent control
Do you know the scoop? Comment below or Send us a Tip