People Magazine Writer: Trump Forced 'His Tongue Down My Throat'

Hours after the NY Times and Palm Beach Post shared stories from three women who say that Donald Trump groped them, People magazine published a first-person account from a former writer who said that the Republican presidential nominee sexually assaulted her. "I’m not sure what locker room talk consists of these days. I only know that I wasn’t in a locker room when he pushed me against a wall," Natasha Stoynoff recalled.

Like the three women who came forward to the Times and Palm Beach Post, Stoynoff was disgusted when Trump claimed during Sunday's second presidential debate that he never sexually assaulted women the way he described in a 2005 Access Hollywood audio that was leaked on Friday. In the audio, which captured a "hot mic" exchange between Trump and his interview BIlly Bush, Trump bragged, "You know I’m automatically attracted to beautiful—I just start kissing them. It’s like a magnet... And when you're a star, they let you do it, you can do anything. Grab 'em by the pussy."

Stoynoff explains, "In the early 2000s, I was assigned the Trump beat for PEOPLE magazine. For years I reported on all things Donald. I tracked his hit show The Apprentice, attended his wedding to Melania Knauss and roamed the halls of his lavish Trump Tower abode. Melania was kind and sweet during our many chats, and Donald was as bombastic and entertaining as you would expect. We had a very friendly, professional relationship." 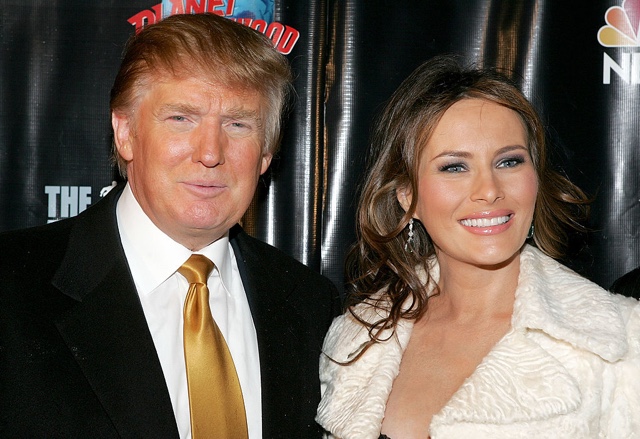 For a story about the couple's first anniversary, Stoynoff went to Trump's Palm Beach estate in December 2005, Mar-a-Lago and interviewed Trump and his pregnant wife. When Melania went to change outfits, Trump, she says, insisted on showing her a "tremendous" room. Then, "We walked into that room alone, and Trump shut the door behind us. I turned around, and within seconds he was pushing me against the wall and forcing his tongue down my throat."

The butler luckily interrupted them with news that Melania would be returning, Stoynoff wrote, "as I tried to unpin myself."

I was still in shock and remained speechless as we both followed him to an outdoor patio overlooking the grounds. In those few minutes alone with Trump, my self-esteem crashed to zero. How could the actions of one man make me feel so utterly violated? I’d been interviewing A-list celebrities for over 20 years, but what he’d done was a first. Did he think I’d be flattered?

I tried to act normal. I had a job to do, and I was determined to do it. I sat in a chair that faced Trump, who waited for his wife on a loveseat. The butler left us, and I fumbled with my tape recorder. Trump smiled and leaned forward.

Stoynoff said that she conducted the interview with the couple numbly, as she tried to process what had happened, "An hour later, I was back at my hotel. My shock began to wear off and was replaced by anger. I kept thinking, Why didn’t I slug him? Why couldn’t I say anything?"

When Stoynoff returned, she told a colleague, who said they should go to the managing editor and kill the story. But Stoynoff felt "ashamed and blamed myself for his transgression. I minimized it ('It’s not like he raped me...'); I doubted my recollection and my reaction. I was afraid that a famous, powerful, wealthy man could and would discredit and destroy me, especially if I got his coveted PEOPLE feature killed."

After the feature ran, Trump called her voicemail, "I think you’re terrific,” he said, “the article was great and you’re great." Stoynoff asked to be taken off Trump coverage duty, noting that she ran into Melania Trump later, who hugged her and said, "Natasha, why don’t we see you anymore?"

The Access Hollwyood audio made Stoynoff feel "relieved. I finally understood for sure that I was not to blame for his inappropriate behavior. I had not been singled out. As he explained to Billy Bush, it was his usual modus operandi with women. I felt deep regret for not speaking out at the time. What if he had done worse to other female reporters at the magazine since then because I hadn’t warned them? And lastly, I felt violated and muzzled all over again."

Temple Taggart, the 1997 Miss Utah who competed in the Miss USA pageant, spoke to the Today show about Trump kissing her; she had previously described the interaction to the Times:

WATCH: "You think of sending your daughter out there with men like that." Former Miss Utah talks Trump https://t.co/v649VvgI0p

Trump's campaign has denied the Times' story and People magazine story, asking why People didn't report it at the time. And Trump's lawyers have demanded a retraction from the Times, while his team is threatening a lawsuit:

Trump would have to be out of his mind to actually file these suits. The discovery would destroy him. https://t.co/Ajww73yeGk

The Times has amazing lawyers. The best. Tremendous lawyers. Believe me. https://t.co/mrv2XTO5MO