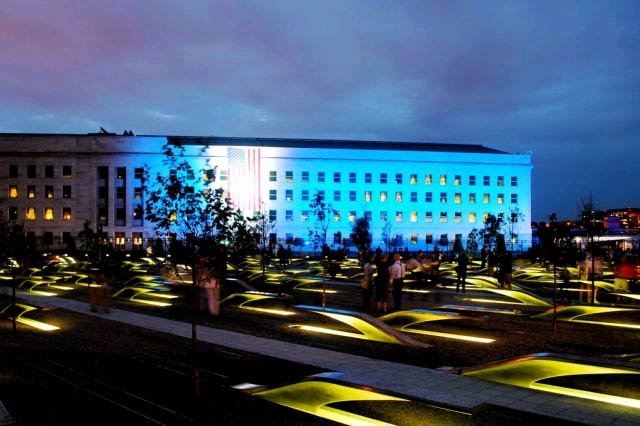 Yesterday, President Bush led the dedication of the Pentagon's September 11 memorial. The Washington Post described it as "the nation's first major permanent Sept. 11 memorial, its 184 benches honoring each of the victims."

The designer are New Yorkers Julie Beckman and Keith Kaseman. They won the design competition (see their entry here), and the Pentagon describes each bench as a "memorial unit...at once a glowing light pool, a cantilevered bench and a place for the permanent inscription of each victim’s name." The benches victims who died in the Pentagon face the building, while those who died on the flight face away from the building.

See more photographs here at DCist. And President Bush said yesterday that "there has not been another attack on our soil in 2,557 days" (a refrain repeated by other members of the GOP). While that may be true, he did get that President's Daily Brief in August 2001 titled "Bin Ladin Determined to Strike in US."