Following months of assurances from transit officials and a slow trickle of details about trains canceled and rerouted, the best efforts of Amtrak, the MTA and New Jersey Transit are being put to the test today. The emergency repair work that Governor Andrew Cuomo so quotably dubbed Amtrak's "summer of hell" is upon us, folks, and it's here to stay for at least the next eight weeks.

For the next few months, Gothamist is partnering with WNYC to steer a course through the commuter rail, subway, ferry, and charter bus muck. For starters, let us know what you are experiencing on day one, using the hashtag #WeTheCommuters on social media.

You can share your experiences—or suggestions, or gripes, or photos and videos—with WNYC and Gothamist, and we’ll use them as discussion points for stories online and on radio. We may even call on you to chat with us on air! 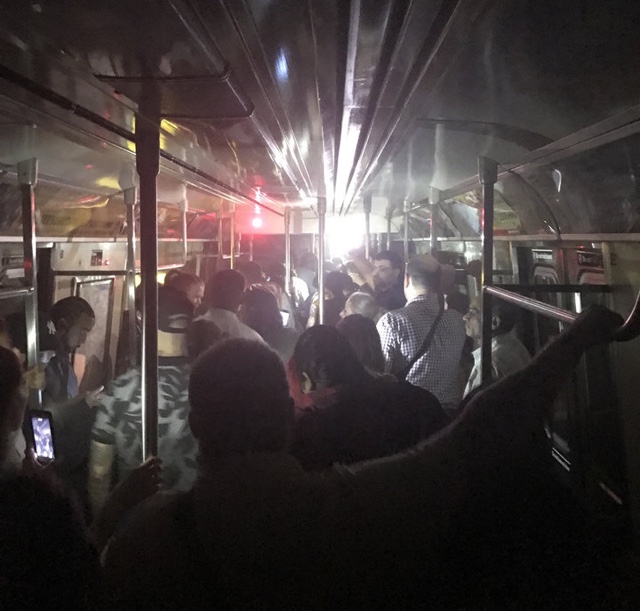 Onboard one of the train cars in the June 27, 2017 A train derailment (Skip Suva)

To recap where things stand this morning: Some, though not all, LIRR riders have been offered a discount on monthly fares, depending on their destination points within the city. While the MTA claims it has enough train cars to accommodate all LIRR commuters, the game plan includes reducing the number of morning and evening trains to Penn Station with a mix of cancelations and reroutings to subway stations in Brooklyn and Queens. Said reroutings will likely increase subway congestion at Atlantic Terminal in Brooklyn and Hunters Point in Queens—a ripple effect that will impact subway commuters currently burdened with their own set of service-related woes.

The MTA is also adding ferry and charter bus service to accommodate LIRR riders, and Governor Cuomo has pledged to speed up bridge and tunnel repairs to accommodate drivers. (DOT Commissioner Polly Trottenberg explicitly discouraged driving into NYC at a press conference Friday morning.) There will be free snacks on the charter buses and, if all-else fails, an MTA letterhead tardy slip for your boss.

"We're asking Long Islanders to change their habits, to try something different," newly-minted MTA Chairman Joe Lhota said during a conference call with reporters on Thursday. And, on Sunday, he wrote a letter to Long Island Rail Road commuters reminding them it's not the MTA's fault. "All of us at the MTA appreciate that Amtrak's repairs are a serious inconvenience," he said. "When our daily commutes become so routine they're second nature, changes and disruptions can be frustrating. During this period of adjustment to the summer schedule, please bear in mind these are Amtrak repairs that are causing this disruption."

Penn Station is already bursting at the seams, with 600,000 daily passengers—more than triple the station's intended capacity, according to Governor Cuomo's Office. The planned repair work will take three of the station's 21 tracks out of commission for weeks at a time. That's 14 percent of the total tracks, and 19 percent of the 16 tracks that serve NJ Transit and Amtrak. The end goal is maintenance of the "tangle and mangle of switches" that make up the so-called A interlocking.

#amtrak
#mass transit
#MTA
#penn station
#subway
#summer of hell
#we the commuters
#original
Do you know the scoop? Comment below or Send us a Tip