In the wake of the horrifying allegations that a former assistant football coach abused and raped young boys, sometimes on campus, and that the school ignored reports of abuse, Penn State's Board of Trustees just held a press conference, announcing the university president Graham Spanier was stepping down—and that beloved and legendary football coach Joe Paterno would no longer be coach effective immediately.

Earlier today, Paterno had announced that he would resign at the end of the season. While the alleged abuse was committed by Jerry Sandusky, Paterno's involvement has been scrutinized because a former player-turned-graduate assistant allegedly witnessed Sandusky raping a young boy in a Penn State locker room shower in 2002. Even though Sandusky saw him, the assistant, Mike McQueary, admitted to investigators that he was so shocked that he just left and asked his father for advice. McQueary's father told him to tell Paterno. McQueary went to Paterno's home the next morning and described what he saw; Paterno then told Penn State athletic director Timothy Curley and Penn State senior vice president of finance Gary Schultz. Curley and Schultz spoke to McQueary a week and a half later, and ultimately decided to tell Sandusky, who mentored children through a charity program, not to bring children into the football building.

At the press conference, John P. Surma, Vice Chairman of the Board of Trustees, said, "I think we had enough information to make the decision. This was collective judgment, which we weighed all the factors to move the university in the right direction." However, many students stood on campus, screaming, "Fuck Spanier!" and "Fuck Sandusky!" and that Paterno must stay. A student told Penn State's college paper, The Collegian, "We have classes and exams to take but we love [Paterno]. He's an icon," while another said, "We want to finish out the season the way we should," indicating that today's youth loves college football more than a moral imperative to report a crime. 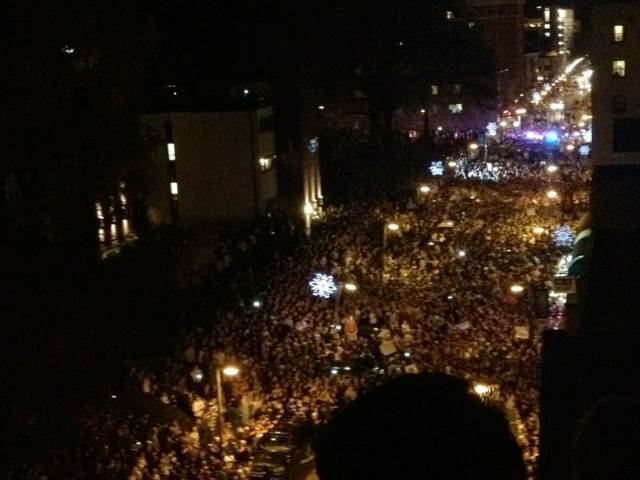 Students on Beaver Avenue (via @dailycollegian)

When announcing the charges, Pennsylvania Attorney General Linda Kelly said, "Despite a powerful eyewitness statement about the sexual assault of a child, this incident was not reported to any law enforcement or child protective agency, as required by Pennsylvania law. Additionally, there is no indication that anyone from the university ever attempted to learn the identity of the child who was sexually assaulted on their campus or made any follow-up effort to obtain more information from the person who witnessed the attack first-hand." The Attorney General's office says that Sandusky's attacks occurred between 1994 and 2009 on eight victims, but now a ninth alleged victim has emerged, due to media reports.

Sandusky was charged with multiple counts of involuntary deviate sexual intercourse, aggravated indecent assault, child endangerment and more while Curley and Schultz were charged with perjury and failure to report (under the Child Protective Services Law).