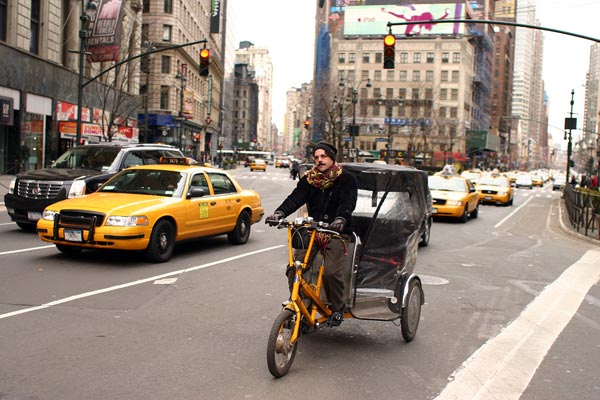 Starting at noon, pedicab owners began a protest down Broadway to voice their opposition to a new city law that started today. Pedicab owners sued the city yesterday in state Supreme Court, claiming the Department of Consumer Affairs distrusted licenses for pedicabs unlawfully. A law passed earlier this year, which pedicab drivers protested, limits the number of pedicab licenses to 325 and preference was supposed to be given to existing pedicab owners before any other operators.

With the new regulations, license applicants are not required to own pedicabs and they can apply for multiple licenses per cab. A lawyer representing pedicab owners says there were 500-600 pedicabs operating before the new law was passed. Pedicab owners participating in the lawsuit include corporate and individual owners.

The pedicab demonstration, started at Columbus Circle and is making its way down Broadway until it reaches City Hall for press conference at 2 p.m. The city's Law Department isn't enforcing the law, for now, due to the lawsuit.

Photo of a midtown pedicab by ~ Raymond on flickr