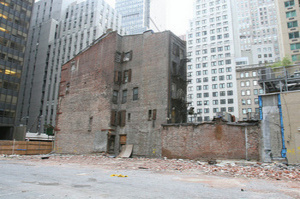 A 19th century Greek revival building on Pearl Street – the road that formed the oyster shell strewn border of New Amsterdam in the 17th century – will soon be torn down, according to the A.P. The former warehouse at 213 Pearl was built in 1831 and was integral to what Ric Burns calls “the first district in the world devoted exclusively to commerce.” Once the city approves the permit, demolition could start as early as next week in order to make room for a new Sheraton Hotel. (This also spoils the Building Collapse Betting Pool on 213 Pearl that Curbed started in April.)

A group of preservationists are fighting the demolition, but they’ve had an uphill battle on this stretch of Pearl Street. Another 19th century building at 215 Pearl was disappeared to make way for a luxury high-rise, and 211 Pearl has been rubbed out in favor of a parking garage. The façade of that building is still eerily standing, however; three mysterious triangular shapes found in the brick may be linked to William Colgate, the soap entrepreneur for whom the warehouse was built. Preservationists are worried that the impending demolition of 213 Pearl will damage the façade.

Amateur historian Alan Solomon tells the A.P. that, ironically, the demolition and redevelopment of the old trade district is being partly financed by tax-exempt Liberty Bonds, issued by the federal government to rebuild the neighborhood around the World Trade Center after Sept. 11, 2001. So if we don’t replace New York’s old buildings with parking garages and chain hotels, does that mean the terrorists win?