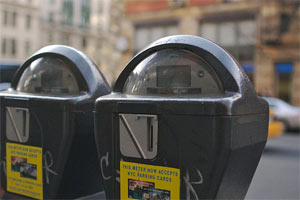 The Department of Transportation announced a plan to test charging higher parking meter rates at high-demand times--the parking meter version of congestion pricing, as it were--in Manhattan and Brooklyn this fall.

According to the NY Times, the goal is to "increase turnover in curbside parking spaces in the test areas...so that drivers will spend less time cruising in search of an open space," which in turn would decrease pollution, searching for a spot, double parking, etc. DOT Commissioner Janette Sadik-Khan said, “We’ve picked corridors that have a lot of congestion and a lot of cruising."

The test areas are: In the West Village, between Houston and Charles Streets and between essentially 7th Avenue South and MacDougal, where the new higher rate of 25 cents will get you 6-7.5 minutes (right now, it's 25 cents for 15 minutes). In Brooklyn, it's a stretch of Kings Highway between Coney Island Avenue and Ocean Avenue, where the new rate will be 25 cents for 20 minutes (versus the current 25 cents for 30 minutes; it's possible the peak rates may go higher). The community boards worked with the DOT to develop the boundaries.

If successful, the program will be expanded. Last month, San Francisco announced it was launching a $23 million pilot program to test peak rate parking meters.