The grassroots movement against the former members of the Independent Democratic Conference, a group of eight breakaway Democrats who caucused with Republicans in the state senate, finally came to a head last night, as six of eight members of the conference were swept out of office in a stunning rebuke to the transactional and often confounding politics of Albany.

"I’m a little bit in disbelief," Susan Kang, the founder of the fundraising group No IDC, told Gothamist on Thursday night. "This was my dream. I didnt think this was going to happen."

But even with the defeat of the bulk of the IDC Democrats—IDC co-founder David Valesky, Staten Island's Diane Savino (who is Senator Jeff Klein's girlfriend), and Senator David Carlucci survived challenges as of Friday afternoon, though Valesky's race is still too close to call—mainline Democrats will still need to flip at least one seat to have a majority in the Senate.

"The Democrats will have a much more cohesive conference, but whether it effects policy hinges on whether they can flip some seats in November," said Blair Horner, the executive director of the New York Public Interest Research Group.

That is now No IDC's priority.

"Because the IDC primaries are over, grassroots energy can focus on flipping red to blue races. We want to have a real secure democratic majority," Kang said. "We're looking at the most progressive legislature in the United States, now primed to lead legislative change, instead of having this awkward republican coalition stymieing progressive reform in the State Senate."

Here's a quick roundup of the fallen (or nearly-fallen) former IDC members.

Everywhere we go—there YOU are!

Alessandra Biaggi, a lawyer and former Cuomo aide, defeated former Independent Democratic Conference leader Jeff Klein, kicking the leader and co-founder of a breakaway faction of senate Democrats out of office in a stunning reversal of fortunes for Klein, who was one of the most powerful legislators in Albany. Klein outspent Biaggi ten to one and even ended up outspending Cynthia Nixon in her race for governor. Biaggi still won by ten percentage points.

“If this doesn’t prove that political currency is people over money, I do not know what does,” Biaggi said at her victory party. “We have now cut the head off the I.D.C. snake.”

Earlier this year, Klein had been accused by a former staffer of forcibly kissing her in 2015. Biaggi had slammed how the state legislature deals with allegations of sexual harassment and assault, and pledged to reform how it deals with these issues if she were elected.

“I think young women are a very visual, but also functional, embodiment of a rebuke of basically New York’s old-boy network,” Ocasio-Cortez told the New York Times. “And voters get that.” 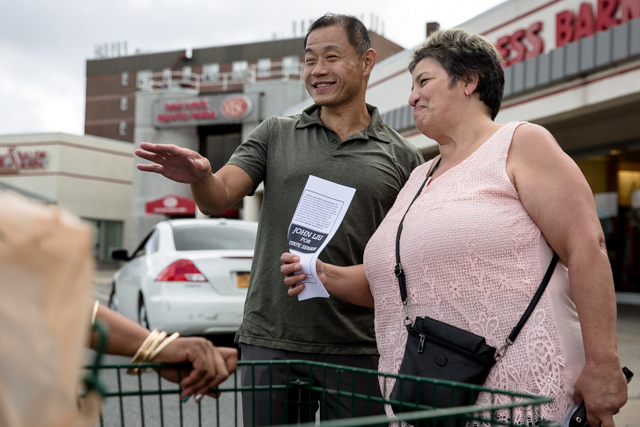 John Liu Is Back (Again)!

Former New York City comptroller John Liu knocked off state senator Tony Avella last night, in a rematch of their closely contested 2014 race, which at the time represented the first substantive attempt unseat an incumbent Democrat in a primary after they joined the Republican-aligned IDC. On a night when five other candidates defeated IDC members, Liu finally took Avella down, following a last-minute July entrance into the race and a sprint towards primary day, handing Avella a five percentage point loss. In 2014, Liu lost by only 600 votes.

Back in July, Liu told Gothamist that while he wasn’t originally planning on running, he wasn’t comfortable with Avella not facing a primary from a Democrat. “It was hard watching this guy go unchallenged after the pure backroom deals that he’s cut over the years even though he always professes to his constituents in this area that oh, he’s above politics, he's only in it for the people,” Liu said. “It’s the biggest crock of crap I’ve ever heard. Somebody should challenge him.”

As comptroller between 2009-2013, Liu was first-ever Asian-American to hold citywide office. While mounting a campaign for mayor, a sting operation by the FBI resulted in two members of his campaign being convicted in a straw-donor scheme. Liu was then denied matching funds by the New York City Campaign Finance Board, severely limiting the reach of his campaign. He finished in fourth. Liu has been a leader on civil rights and policing issues for years, coming out as the first citywide official to condemn the Bloomberg administration’s use of “stop and frisk,” and calling for the decriminalization of marijuana as a centerpiece of his mayoral campaign.

Avella pointed to paid family leave and raising the minimum wage as the IDC's marquee accomplishments, and had dismissed criticism of the group as "national hype."

"This is all national hype, because everybody’s so upset about Trump, and I understand that, but let’s look at the reality of the situation," Avella told Gothamist last month. "It would have been the same situation had we been in the Democratic conference. At the end of the day, I believe, you’re supposed to work together to get things done."

Jessica Ramos Went From Protesting Her IDC Senator To Beating Him

Queens State Senator Jose Peralta was the last member of the IDC to join, and less than two years later he was trounced by 33-year-old Jessica Ramos. “We need to show we’re taking money out of politics, that we’re building a people-powered movement, and sending a strong message that if we do the work we can make change possible,” Ramos told her supporters at her victory party last night.

State Senator Jesse Hamilton, who was only elected in 2014 to represent neighborhoods including parts of Brownsville, Crown Heights, Gowanus, Park Slope, Prospect Heights, Prospect Lefferts Gardens, and Sunset Park, fell to newcomer Zellnor Myrie, who got 54.1% of the vote.

The tide against Hamilton has been turning for more than 18 months, with angry constituents futilely demanding his withdraw from the IDC. And earlier this year, Crain's exposed that Hamilton was illegally running his campaign out of his non-profit community group's housing, which was meant to be a rent-stabilized apartment unit.

Myrie, an attorney and advocate for criminal justice reform, convinced enough voters that Hamilton was part of a Senate bloc helping developers and builders, while Myrie himself helped the City Council draft a tenant bill of rights.

I want to thank the people of Central Brooklyn for putting their trust in me. I am so honored to be your next State Senator. pic.twitter.com/n6PamyApJx

Marisol Alcantara Is Two Years And Out

In 2014, former City Council Member Robert Jackson ran against Marisol Alcantara for the State Senate seat that covers Inwood and Washington Heights, but came in third in a third three-way race, just 533 votes behind Alcantara. On Thursday night, Jackson defeated Alcantara by 8,594 votes, with 56.0% of the vote over her 38.5%.

Alcantara's alliance with the IDC was too much for voters, despite her progressive bona fides as a union organizer. Critics accused her of selling her soul, and her former ally, Rep. Adriano Espaillat, withdrew his support due to her IDC connection.

In spite of outspending Jackson more than two-to-one ($265,000 to Jackson's $125,000), Alcantara faltered. On Primary Day, her supporters sent out a text message claiming that polls closed at 7:30 p.m.—90 minutes before the actual closing time.

Jackson, who has a track record as an education reformer, made his campaign pitch last month: "Vote for change from the current status quo where the Republicans control the state Senate, where many pieces of legislation that affect the entire city and the entire state are being held up."

Some of her views are more conservative and align more closely with voters on Republican stronghold Staten Island. Commenting on a millionaire's tax proposed by progressive candidates, Savino said, "I’ve been there, done that. I’ve seen this movie and I know how it ends. It’s the fastest route to the minority."

She also defended boyfriend Klein when he was accused of sexual assault, insisting she was with him during the time of the alleged incident.

Interestingly enough, Savino's name was being tossed around for Public Advocate should Letitia James win the Attorney General's race, which she has.

State Senator Felder, a Brooklyn Democrat who was not part of the IDC but nevertheless caucuses with the GOP, quashed a novel campaign challenge by progressive candidate Blake Morris.

Felder crushed his opponent by a nearly 2-to-1 margin, racking up 15,197 votes to Morris's 7,854, approximately 63 percent to 33 percent of the total ballots cast, according to unofficial election night returns by the New York State Board of Elections.
According to early reports from Morris campaign staff, Felder prevailed in Borough Park and Midwood, areas that have a high concentration of Orthodox Jewish voters, a community where he enjoys broad support—Felder is Orthodox. An aggressive campaign targeting Orthodox voters, consisting of fliers, op/eds, and endorsements by religious leaders appears to have been effective.

Read all about Felder's win here.