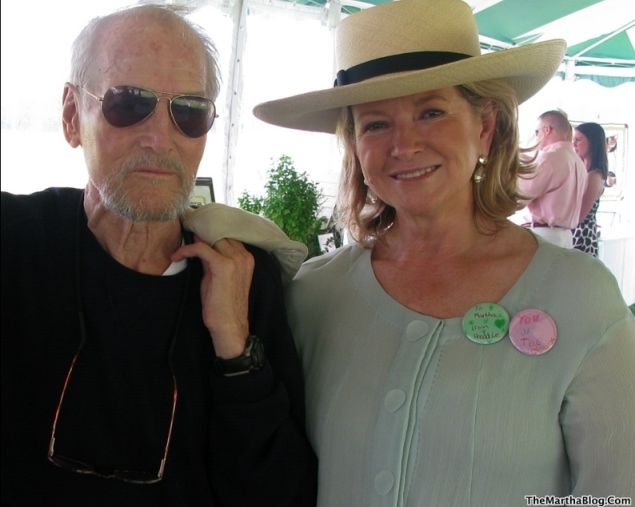 Photo of Paul Newman and Martha Stewart at a recent benefit for Newman's Hole in the Wall Gang summer camp via The Martha Blog.

There is growing speculation that 83-year-old actor Paul Newman is battling lung cancer. According to LA Times blog The Dish Rag, Newman is receiving outpatient treatment at Memorial Sloan-Kettering Cancer Center in Manhattan. Rumors about Newman’s ill health have escalated since last week, when Martha Stewart published the above photo on her website, depicting a frail Newman attending a benefit for his Hole in the Wall Gang summer camp for children with cancer and other serious illnesses.

But according E! Online, Newman's agent Toni Howard is denying reports that the actor is terminally ill with lung cancer. The Daily News has it that after undergoing surgery for an unspecified malady last January, Newman issued a statement saying, "I'm being treated for athlete's foot and hair loss … maybe the doctors know something that I don't!" And when Newman had to back out of a City Center appearance on Monday to benefit the Hole in the Wall Gang, his publicist told reporters that Newman has been "having back problems. He has to stay off his feet for a couple of weeks."

Fox News notes that Newman, who was a chain smoker for many years, formally transferred the entire value of his ownership in Newman’s Own to his charitable foundation on his 80th birthday; the amount totals over $120 million. The actor still resides in Connecticut with his longtime wife Joanne Woodward, who also serves as the artistic director at the Westport Country Playhouse. Late last month Newman announced that he would have to back out of directing a production of Our Town at Westport later this summer.