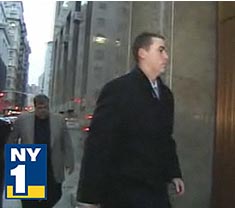 As expected, NYPD officer Patrick Pogan, the rookie cop caught on video slamming a cyclist to the curb in a seemingly unprovoked assault during a July Critical Mass ride, turned himself in this morning. The grand jury indictment was then unsealed at State Supreme Court in Manhattan, and, according to NY1, Pogan was arraigned on a misdemeanor assault charge and a felony charge of filing a false report. (After arresting cyclist Christopher Long that night, Pogan accused Long of attempting assault, resisting arrest, and disorderly conduct, contending that Long rode his bike straight into him, knocking them both down. Those charges against Long were later dropped.)

Pogan, 23, pleaded not guilty to felony charges and was then released without bail. NY1 reports that Police Commissioner Ray Kelly called the "situation sad and disappointing...It's certainly sad and disappointing to see any officer indicted, but especially one who had only been out of the police academy for three weeks."

Commenters on NYPD Rant are predictably disappointed, too; one opines: "He may have made a mistake, he shouldn't be indicted for it. Where is the serious physical injury? What weapon did he use?" Another feels that that there's a time and a place for this sort of thing, and "Times Square is not the place to give out your own justice, thousands of security cameras, as well of hundreds of our own."

David Rankin, Long's lawyer, tells the Daily News, "We hope it's a message to police officers that when they swear out a complaint, they need to tell the truth. If you lie, you're criminally liable."