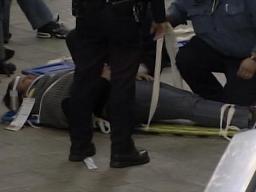 Passengers on a PATH train from Newark to the World Trade Center station had a shaky ride this afternoon. The train started to shudder from side to side, causing a motorman to stop the train. WNBC reports that at least 30 people were injured, with "as many as 10 passengers...taken off the train on backboards."

Hours earlier, a train on the M line derailed at Chambers Street. There were no passengers, just transit workers, and the train operator was stuck inside the train. Apparently the train hit a bumper block, causing the derailment, and it's unclear how fast the train was going at the time. The FDNY and Transit Authority also have conflicting POVs on the accident: The FDNY said it seemed like one train went off the tracks, while the TA says none of the wheels left the tracks. WABC 7 reported, "It is likely the train was being moved into a position to return uptown."

And while the 5 train is where crushes and websites blossom, it's also popular for perverts during crowded commutes. The police arrested two men in separate molestation incidents during yesterday's morning rush hour. A man rubbed up against a 38-year-old woman around 8:30AM while 20 minutes later another man rubbed up against a 14-year-old girl - both on southbound trains.