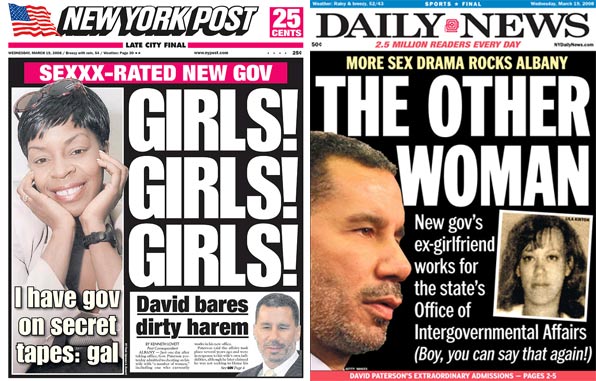 Governor David Paterson hoped his and his wife's admission that they had extramarital affairs meant that everyone could move on. Other politicians certainly want to move on and constituents generally don't think it's a big deal (Hookergate fatigue?), but now that the tabloids have license to run with it, it means details (and long cover headlines) galore! 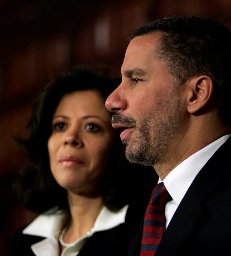 One of the women Paterson had an affair with worked for under Governor Spitzer, when Spitzer was an Attorney General. Lila Kirton continued to work Spitzer when he became governor and is now community affairs director for the Office of Intergovernmental Affairs, a $150,000/year job. She is the woman Paterson romanced at the Days Inn on the Upper West Side. Paterson has repeatedly denied using any campaign funds for any of his affairs.

The Post speaks with Olympic gold medalist Diane Dixon, who got a job with the city's education department, thanks to Paterson, and told the Post she had tapes of Paterson's voice mails from this year, including one from this week. Except it doesn't seem (maybe?) that they had any sort of affair; when asked about her intimation she was close to Paterson, Dixon said, "Don't you go there. Don't go there. He and I were just friends. It's all a joke. Just a joke."

Other odds and ends: The NY Times has an editorial, begging that politicians get to work. The Daily News' Juan Gonzalez, whose interview with Paterson and and wife Michelle essentially broke the affair story publicly, admires Paterson's frankness, but the Observer's Choire Sicha wonders why the Patersons met with Gonzalez and then gave the press conference. Newsday looks at the culture of infidelity Albany nurtures. And the News' Amy DiLuna appreciates Paterson's honesty, but hates the revenge sex aspect of his confession.