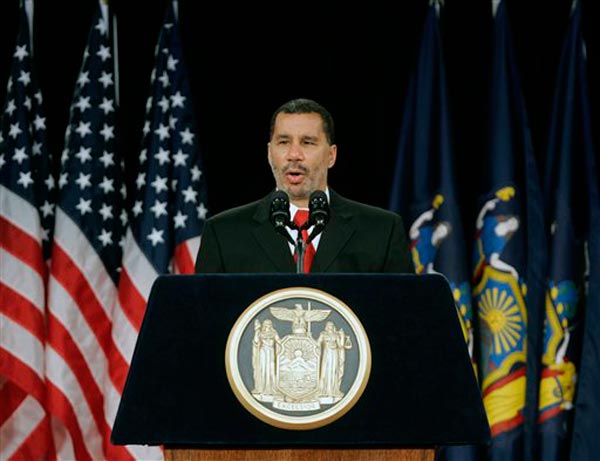 Governor David Paterson has been talking about New York's grim financial situation pretty much since he took office. Now, with Wall Street's troubles and the overall recession, he offered a $121.1 billion executive budget that closes a $15.4 billion budget deficit for this year and next.

Notably, education will face a cut of $700 million next year (or 3.3%); the NY Times reports, "Increased aid for operating expenses and pre-kindergarten that had been expected as part of the settlement of a long-running lawsuit of school aid would be delayed by four years under the plan." Medicaid growth would be limited and NYC will end up without $650 million in aid.

The Daily News summarized some of the proposed taxes in addition to the so-called obesity tax:

- An "iPod tax" that charges state and local sales tax for "digitally delivered entertainment services" - in other words, that new Beyonce song you download.
- State sales tax at movie theaters, sporting events, taxis, buses, limousines and cable and satellite TV and radio.
- Costlier driving with the repeal of the 8-cents-per-gallon sales tax cap on motor and diesel motor fuel, plus and increase in the auto rental tax.
- Tuition increases as SUNY and CUNY, $620 and $600 a year respectively.
- A 50 cent tax on cigars. The current tax is equal to 37% of the wholesale price, or 34 cents a cigar.
- No more sales tax break on clothes and shoes worth $110 or less, except during two weeks a year.
- Higher taxes on wine, beer and flavored malt beverages. He would also impose an 18% tax on non-nutritional drinks like soda.
- The rich would pay more for luxury items through an additional 5% tax imposed on cars costing more than $60,000, aircraft costing more than $500,000, yachts costing at least $200,000 and jewelry and furs costing in excess of $20,000.
- In addition, a host of a fees, including those related to motor vehicle licensing and registration, parks and auto insurance, would go up, as would various state-imposed fines.

Other fees/taxes proposed, via Capital Confidential—"Local fee for hiring a public retirees, a bad check fee, and higher vehicle safety fines"—which also notes that today is the 235th anniversary of the Boston Tea Party.

Paterson said, "For years, record revenues from Wall Street allowed State spending to increase at an unsustainable rate. With the financial services industry in the midst of an unprecedented crisis, we must fundamentally reevaluate what our State can afford to spend. Change is unavoidable, and the proposals I have put forward today begin the difficult process of adapting to a new fiscal reality. Just like thousands of families across New York, our State government needs to tighten its belt and limit spending to what we can afford."

More details on the budget here. Paterson presented the budget a month early, and he is optimistic the Legislature (which is still without a Senate leader) will be able to pass it. Assemblyman James Tedisco, who heads the Republican caucus, told the Times, “The good is that he is holding the line on spending. The bad is that there are $4 billion in new taxes and fees and that will hit the middle class right in the solar plexus.” Assembly Speaker Sheldon Silver, who told the Daily News he supports raising the income tax on the wealthy, said, "I'd rather have a broad-based tax than nickel and dime various constituencies in this state.

#budget
#budget crisis
#fees
#governor paterson
#ny state budget
#taxes
Do you know the scoop? Comment below or Send us a Tip