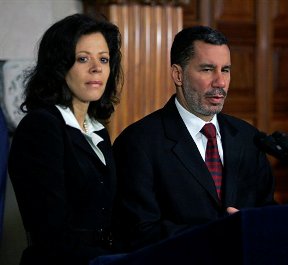 During his first full day as Governor, David Paterson and his wife Michelle held a press conference discussing their infidelities, with Paterson explaining, "I didn't want it hanging over my head. I didn't want to be compromised." Honest? Yes. Bizarre? that too!

Following up on their joint interview in today's Daily News, Paterson admitted to having many affairs, but apparently only after learning wife Michelle had been unfaithful. Paterson said, "The fact is for my own action, I was angry, I was jealous and I exercised poor judgment. One day I realized it and I just decided I would go to counseling." More to the point, Paterson just wanted to get this bit of gossip out of the way:

“I betrayed a commitment to my wife several years ago. And I do not feel I’ve betrayed my commitment to the citizens of New York State. I haven’t broken any laws. I don’t think I’ve violated my oath of office. I saw this as a private matter. But both of us committed acts of infidelity.”

The affair occurred while he was a State Senator; at least one of the women he was involved with worked in state government. Paterson also admitted he called one girlfriend's employer, urging the employer to keep her on while she recovered. And Paterson emphatically denied using any taxpayer funds for his affairs.

Now, though, the Governor said, "We’re very much in love with each other now. I was in love with Michelle even when I knew the marriage was in grave danger.” Michelle Paige Paterson said, "We dealt with it as a family. A marriage has peaks and valleys ... No marriage is perfect."

Assembly Leader Sheldon Silver and Senate Majority Leader Joseph Bruno seem eager for the news media to accept the news as is; Silver said, "If anything it's a testament to him saying, stop your searches -- it's not an uncommon occurence in people's lives when marriages are failing," while Bruno said, "I think his personal life is his personal life."

#adultery
#affair
#david paterson
#Governo Paterson
#michelle paterson
Do you know the scoop? Comment below or Send us a Tip