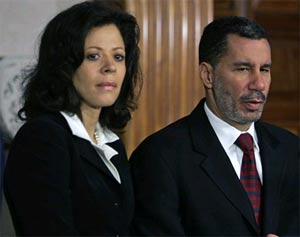 The past few weeks may have been full of Governor David Paterson's admissions over extramarital affairs and drug use, but Paterson has still been hailed as exactly what New York needs as a leader right now. However, his role in directing at least $150,000 in state funds to a hospital that hired his wife to lobby the state for money gets the once-over in the NY Times today.

Paterson arranged for his wife, Michelle Paige Paterson, then a representative of North General Hospital in Harlem, to meet with Assembly Leader Sheldon Silver in 2003. Silver "agreed to meet, but warned that it would be improper for the senator to be present." (Paterson later said he shouldn't have arranged the meeting.) In 2003, Paterson himself directed $50,000 of his member-item money to the hospital, and then another $100,000 from the capital budget in 2004.

Paterson claims that he helped the hospital before it hired his wife (though those records couldn't be found) and says everyone was rallying to help troubled North General, telling the Times, “If an entire neighborhood in East Harlem was now deprived of the hospital’s services because the legislator who represents them doesn’t help them because his wife works there, I think that’s unethical."

In other Albany money news, the new state budget looks like it's $124 billion, almost $6 billion more than last year's.

#david paterson
#governor paterson
#michelle paterson
#North General
Do you know the scoop? Comment below or Send us a Tip