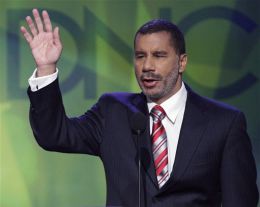 Governor Paterson has reignited plans on the construction of Moynihan Station, the long-delayed new home of Penn Station in the post office across the street from the current one. Paterson really threw his hat into the ring attempting to stir up excitement and confidence for the new chapter in the saga of the station saying, "We're going to respond to this challenge - and do you know why we're going to respond? There's a new sheriff in town."

The biggest change of plans that Paterson called for yesterday is shifting control of the station's construction over to the Port Authority. The project has been coordinated by the Empire State Development Corporation, the state’s economic development arm. Paterson thinks that the Port Authority will be able to sort through disagreements between Amtrak, NJ Transit and the LIRR, the three feuding railroads who need to unify some operations in order for the massive overhaul to work. Paterson announced that he was asking the leadership of the three railroads to report to himself and Governor Corzine on how they planned to work together.

Paterson said that the project should also be coordinated with New Jersey's proposed Hudson River tunnel and promised an action plan for Moynihan Station by the end of next month. Paterson would like to see the $2 billion that the Port Authority has set aside for unspecified transportation projectsused for the new Penn.

City Hall has already expressed some skepticism for Paterson's new proposal with Deputy Mayor Robert Lieber saying, "(The Port Authority) already has its hands full at Ground Zero." A spokesman for the Port Authority however said they are eager to take on the governor's new challenge.

While Paterson's tenure as governor thus far has been marked by a budget crisis that is requiring major cutbacks in spending, he said that the Moynihan Station and a reinvestment in railroad at this point in our nation's history transcends those setbacks. Municipal Art Society is trying to put the project in an optimistic historical context noting, "The state was facing a deficit for seven of the ten years it took to construct the Erie Canal and the Lincoln Tunnel, George Washington Bridge and the Independent Subway System (IND) were all constructed during the Depression."