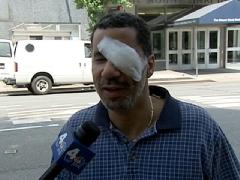 Governor David Paterson says he's doing fine after cataract surgery yesterday at Mount Sinai Hospital in Manhattan. WNBC caught up with him after the 90-minute procedure, and the Governor urged everyone to have their cataracts removed, since it's such an easy procedure.

This is the fourth eye-related surgery Paterson has had in six weeks. On May 20, he was admitted to Mount Sinai for "migraine-like symptoms" which were actually caused by a glaucoma on his left eye. Paterson is legally blind, with only partial vision in his right eye.

Paterson spent yesterday recovering in his Harlem home. He still plans on marching in the Gay Pride Parade on Fifth Avenue today.

#cataract
#cataract surgery
#david paterson
#governor paterson
Do you know the scoop? Comment below or Send us a Tip