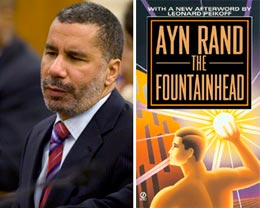 Governor David Paterson went to Washington D.C. yesterday and stated the case for the Empire State, "New York doesn't need a handout, we need a handback."

After thanking the House Ways and Means Committee for inviting him, Paterson began his remarks by saying, "The great novelist Ayn Rand advised us in the Fountainhead that our country, the greatest country in the world, was founded on the basis of individuals, where people were encouraged to adventure, not to be complacent; to be daring, not dormant; to prosper, not to plunder. But, unfortunately, an infection of greed and mismanagement combined with a lack of transparency and government regulation have brought us to the point where our nation faces a downturn in its economy only rivaled by the Great Depression. "

With the economy faltering and Wall Street hurting, NY State faces a $47 billion budget deficit by 2012, and Paterson noted that NY has given the feds much more in taxes than it gets back (much the same way NYC gives the state more in taxes than it gets back). Paterson, along with other governors including NJ Governor (and former Goldman Sachs head!) Jon Corzine, recommended a second stimulus package for state governmentsCorzine said, "The federal government ignores state and local governments at serious peril." Paterson also suggested increased federal funding for things like food stamps, unemployment, and infrastructure spending.

#ayn rand
#bailout
#goldman sachs
#Governor Corzine
#governor paterson
#state stimulus
#The Fountainhead
Do you know the scoop? Comment below or Send us a Tip