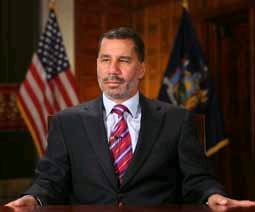 Governor David Paterson's unusual televised Tuesday afternoon speech detailing the state budget's deficit and imploring lawmakers to head back to work* has been followed up with some specifics today. He says a 7% cut to state agency spending would save $630 million. Paterson also suggests an "immediate hard hiring freeze," and wants the Legislature to help find $1.2 billion in savings.

During his speech yesterday, Paterson implied the state would need to think about selling roads, bridges and tunnels to close the widening deficit. Citizens Budget Commission state police expert Elizabeth Lynam told the Post, "If it's used to close a budget gap, it's a one-shot. It's doesn't help you in the long run. It's a fiscal gimmick." And other lawmakers had concerns; Assembly Leader Sheldon Silver said, "In every period of economic decline, the call for cuts and caps gives rise to the same important questions. What programs will be cut?”

Still, some watchdog groups were happy that Paterson is sounding the alarm bell about the budget and how the government needs to "do more with less" overall; the Manhattan Institute's director of Empire Center for New York State Policy, E.J. McMahon, said to the Daily News, "The more he drives home this message the better."

Political operative Bill Cunningham who worked for Governor Hugh Carey in the 1970s and Mayor Bloomberg as a communications director broke down Paterson's situation to the Observer, comparing it to the crisis Carey eventually was able to work through, “So, you can conceivably deal with budget problems that seem intractable and still get to a point where you can cut taxes. But Governor Paterson doesn’t have a full four-year term in front of him. He has two and a half years left to go before an election.”

*The Politicker says Governor Paterson apologized for saying Albany lawmakers were on vacation (the lawmakers are in their district offices now).