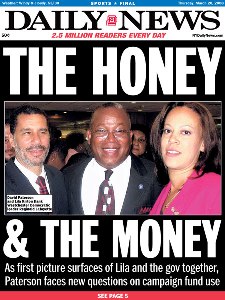 The Saga of Love Gov, Part 2 continues with Governor Paterson's admission he may have used a campaign credit card to pay for a hotel room, but charged it as "constituent services." Say it all together now: "That's some 'constituent services'!"

Paterson told the Daily News, "I do remember that there was a time I might have had to use the [campaign] card because my other [personal] card didn't work," but the News found "a handful of other campaign expenditures" where Paterson could have used "campaign funds to cover personal expenses and misstated their purpose in public disclosure forms." And check out how Paterson recommended a friend for a job with the NYC Department of Education; initially she was deemed not a "good fit" and then, after another call from Paterson, she was. Goddamnit, no one wants next-in-line State Senator Majority Leader Joseph Bruno as Governor!

The News found a "professional services" payment to Lila Kirton, a state employee who did have an affair with Paterson. The Post went to Kirton's home and found her husband, Randy Lloyd, ready to throw the trash, before yelling "Get out of here! Get off my property!" and throwing a trash can at a photographer. A Kirton family friend described Lloyd as "a big guy who understandably is going to be very unhappy about this."

But the best photograph of the day is the NY Times' one of a 17-year-old kid reading New York magazine's Spitzer cover story; sex education via the state, people.

#affair
#david paterson
#days inn
#governor paterson
#Lila Kirton
#ny state
Do you know the scoop? Comment below or Send us a Tip
A new Gothamist is coming! We’ve moved comments over to our beta site. Click here to join the conversation and get a preview of our new website.