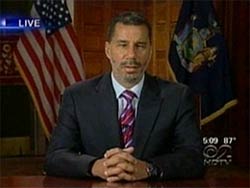 Governor Paterson gave a rare televised address this afternoon, asking state lawmakers to head back to Albany for an emergency session to discuss the state deficit. Paterson said the deficit had gone up $1.4 billion in 90 days, from $5 billion to its current $6.4 billion.

Here's his text, via the Times-Union:

“The fact is, we confront harsh times. Let me be honest. This situation will get worse before it gets better.

“My message to the legislature: next year’s budget process starts now. New York residents are already making tough choices…New Yorkers are prioritizing spending each day…now your government is going to follow your lead. We are going to end legislators’ vacations and bring them back to Albany to reprioritize New York state’s finances.

“Now government will do what New Yorkers do when when their incomes have fallen. We will cut spending. But I can’t do it alone."

Paterson asked legislators to get back to work on August 19. New Senate Majority Leader Dean Skelos suggested that the governor follow the senate's spending cap.

Prior to Paterson's address, Mayor Bloomberg said, "The state can not solve its problems on the backs on New York City taxpayers. New York City sends $12 billion more to Albany than we get back every year."

#david paterson
#governor paterson
#state deficit
Do you know the scoop? Comment below or Send us a Tip
A new Gothamist is coming! We’ve moved comments over to our beta site. Click here to join the conversation and get a preview of our new website.