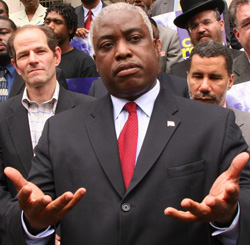 Carl Andrews, former state senator from Brooklyn, has resigned from his $171,000-a-year job as aide to Governor Paterson in the midst of allegations that he illegally pressured the State Liquor Authority to renew liquor licenses for the Cipriani restaurants in Manhattan. After SLA Chairman Daniel Boyle (a Republican appointee) told the Post that Andrews tried to "intimidate" him into voting for the renewal, State Attorney General Andrew Cuomo launched a criminal investigation.

The Post also learned that the two Democratic appointees on the three-member SLA commission were given the use of state-owned cars after approving the Cipriani application. Which doesn't look good.

In an interview with the Post last night, Andrews denied that he was falling on his sword because of the Cuomo investigation: "My leaving is something that I've wanted to do. It's a plan that I've had and I'm implementing it." And he continued to insist that he did not apply "illegal pressure" on Boyle to vote for the Ciprianis. As of January 1st Andrews will start his own political consulting and lobbying firm (naturally).

The question now is whether any of this will blow back on Governor Paterson, which could potentially give New Yorkers their second governor resignation in a year. Just to be on the safe side, let's get to know our current Lieutenant Governor—oh no!