Paterson Aide Owed 200K in Taxes Cause He Was Bummed 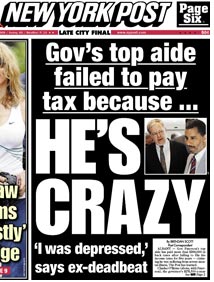 Senior in-house adviser to Governor Paterson Charles O'Byrne owed over $200,000 in unpaid taxes until settling recently with the government. His reasoning for not paying state or federal taxes from 2001 to 2005 while being employed by the state: depression.

"Keeping up with the mail, frankly, and keeping up with the personal affairs of my life was the primary casualty of the depression I've suffered and have been treated for," O'Byrne tells the Post. O'Byrne is an openly homosexual former Jesuit priest who was on the altar for both the wedding and funeral of JFK Jr. After leaving big money as a corporate lawyer for priests, he took his finances into his own hands while working on a memoir.

"I'm clinically aware of the fact that it is a consequence of an illness over which I had no control. As anyone who's been through a clinical depression understands, parts of life fall apart," said O'Byrne when the Post found out about an outstanding $11,500 tax warrant listed by the Department of State. Now, as an aide to Paterson, he makes $178,500 a year. Paterson told the paper that he is more than satisfied that with his top aide's explanation and settling of the matter.

#charles o'byrne
#depression
#governor paterson
#jesuit
#kennedy family
#unpaid taxes
Do you know the scoop? Comment below or Send us a Tip