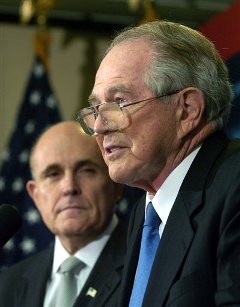 Earlier today, the Reverend Pat Robertson endorsed Rudy Giuliani for president, showing that the former mayor was able to win over an influential Christian conservative leader. Robertson explained,"To me, the overriding issue before the American people is the defense of our population from the bloodlust of Islamic terrorists.... We need a leader with a bold vision who is not afraid to tackle the challenges ahead."

And he acknowledged Rudy's NYC history, "Rudy Giuliani took a city that was in decline and considered ungovernable and reduced its violent crime, revitalized its core, dramatically lowered its taxes, cut through a welter of bureaucratic regulations, and did so in the spirit of bipartisanship which is so urgently needed in Washington today."

The NY Times reports that endorsement may help Giuliani "reassure Republicans who are wary of his support for abortion rights and gay rights." Robertson also said that while he did not question Giuliani about his stance on abortion, the evangelist was confident Giuliani would appoint judges "who share the judicial philosophy of John Roberts and Antonin Scalia." We can sense countless people shuddering at that statement! You can watch video of Robertson's endorsement here.

But today did not hold all good news for Giuliani: His pal and former NYPD commissioner Bernard Kerik expects to be indicted soon for charges related to accepting thousands in home renovations from a contractor who wanted a city license. Giuliani has been sticking up for Kerik, told the AP, "There were mistakes made with Bernie Kerik. But what's the ultimate result for the people of New York City? The ultimate result for the people of New York City was a 74 percent reduction in shootings, a 60 percent reduction in crime, a correction program that went from being one of the worst in the country to one that was on '60 Minutes' as one of the best in the country, 90 percent reduction of violence in the jails."

Photograph of Giuliani and Robertson by Kevin Wolf/AP