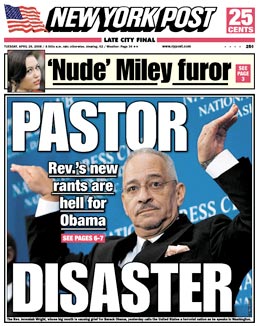 Barack Obama's former pastor the Reverend Jeremiah Wright has taken over the spotlight from the candidate as he goes on a speaking tour that provides fodder for Obama's rivals, be they Democrat or Republican.

For instance, the Post reports that Wright "delivered his most brutal wallop to his pal's campaign as he hailed hatemonger Louis Farrakhan and accused the United States of committing terrorism." And the Post front covers it "Pastor Disaster."

The NY Times' Bob Herbert says Wright's "re-emergence...has been devastating," "The Rev. Jeremiah Wright went to Washington on Monday not to praise Barack Obama, but to bury him." Obama has been trying to put distance between himself and the pastor, but Wright's presence is causing concerns among superdelegates.

The Daily News' Errol Morris wonders if a Hillary supporter--and member of the National Press Club--helped organize Wright's Monday speech to aid Clinton. While he can't be sure, Louis writes, "it's safe to say she didn't see any conflict between promoting Wright and supporting Clinton."

And Politico's Mike Allen shared two Blackberry messages received after Wright's speech: From a Democrat--"This wasn't an interview. Or a speech. That was a sermon. With call and response. So now we ALL have seen it. And I for one wanted to leave after 20 seconds, let alone 20 years," and from a Republican, "This is amazing. On CNN now. Every answer is a devastating story."

An AP-Ipsos poll released today says Clinton would beat John McCain by 9 points. Obama and McCain are running even.