If you're looking for fuel for a bad mood, hop on a bicycle and and take a ride through the city's bike lanes, resolving to battle anything not on two wheels that threatens your journey. Within blocks, you'll find you've shouted obscenities at all sorts of things: Toddlers, pets, piles of leaves, and lots and lots and lots of cars.

On a normal day, though, it's necessary to choose your battles. A tipster sent us this photo of an SUV, Size XL, parked moronically on 91st Street between Park and Lexington avenues, undoubtedly while its owner was draped on a crowded train somewhere, spreading his legs into cramped innocents. While bad parkers should of course be summarily executed frowned upon, this slight brush with the edge of a bike lane is not even close to the most egregious offense a person will encounter while riding.

But change occurs slowly, one petulant note at a time, or so one fed up neighbor apparently decided on Tuesday when he or she placed the following note in the Lincoln PathCrusher's window. "Dear Driver," it reads "PLEASE pull your vehicle closer to the curb! It is way too big to be half-way out in the bike lane and a foot from the curb!" Note the exclamation points, Official Punctuation of the Passive Aggressive. 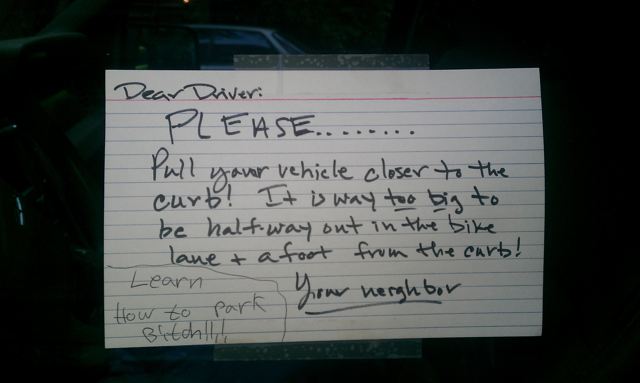 As pleasant as the note was, knowing your audience is an essential element in successful communication. The real bad-ass here was the person who, realizing the message would never be interpreted as intended, stepped in to translate. "Learn how to park bitch!!!!" it blares. Now we're cooking with gas!

Our tipster tells us that though the car was still parked in the same space this morning, note still attached, its wheels were no longer jutting ever so slightly into the edge of the bike lane. Progress, bitch.

#bad parking
#bike lanes
#cycling
#cycling etiquette
#parking
Do you know the scoop? Comment below or Send us a Tip