On a recent morning in February, 9-year-old Zayne Cowie sat in front of a fence that encircles City Hall, in downtown Manhattan, behind a handmade rainbow-lettered sign that says “Climate Strike.”

It was a windy day and Zayne shivered in his winter parka, while his mother searched his backpack for gloves. To keep warm, Zayne started running in circles, weaving around people walking down this busy stretch of Broadway.

Every Friday, this Brooklyn fourth-grader skips school to raise awareness of the climate crisis, inspired by Greta Thunberg, the 16-year-old activist who has been protesting in front of the Swedish Parliament since last August and encouraged kids around the world to strike as well.

At #NYCCityHall again. Asking for action that meets the urgency and seriousness of climate change! (My 6 y.o. sister is with me again, hiding)#FridaysForFuture #ClimateStrike #WhateverItTakes @FFF_USA @GretaThunberg pic.twitter.com/6omDlkP16k

“Climate change is happening faster than we can react,” he said. “Well, we could react fast enough but nobody cares.” Zayne comes here, the seat of New York City government, hoping to draw the attention of his local lawmakers. This is his Week 10.

“Mostly I just sit here,” said Zayne, when I asked him what it means to strike. “But sometimes people do stop to chat.” Mark Chambers, the director of the Mayor's Office of Sustainability has come by, as well as staffers with city councilmembers Brad Lander and Costa Constantinides. 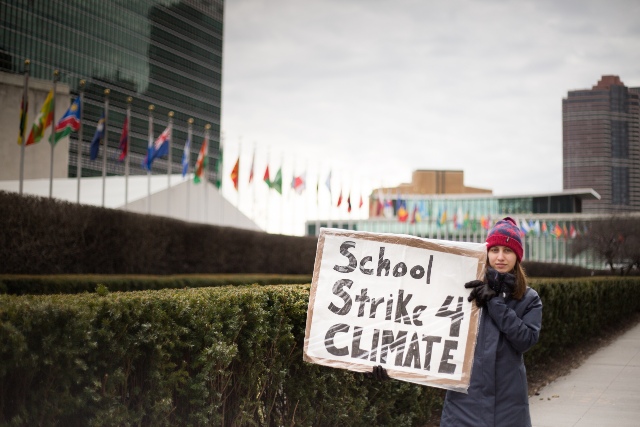 For 13-year-old Alexandria Villasenor, deciding to strike came after visiting family in California.

“I was there when the Paradise Fire broke out,” said Alexandria, on a recent Friday. “I was close by to that and the smoke was suffocating. It was a scary experience.” She took it as a wake-up call that climate change was probably the most important thing she should be learning.

The reality is terrifying: A report released by the U.N.’s Intergovernmental Panel on Climate Change in October warned that nations need to take “unprecedented” actions to cut their carbon dioxide emissions in half by 2030 to prevent the worst consequences of climate change. Those consequences are already being felt in places like Bangladesh and Australia, and as the global average temperature rises, scientists predict all the coral reefs will die, wildfires will grow more severe, drought and famine and poverty will be more widespread, and the ensuing chaos could bring civilization to the brink of collapse. Meanwhile emissions hit a record high last year. 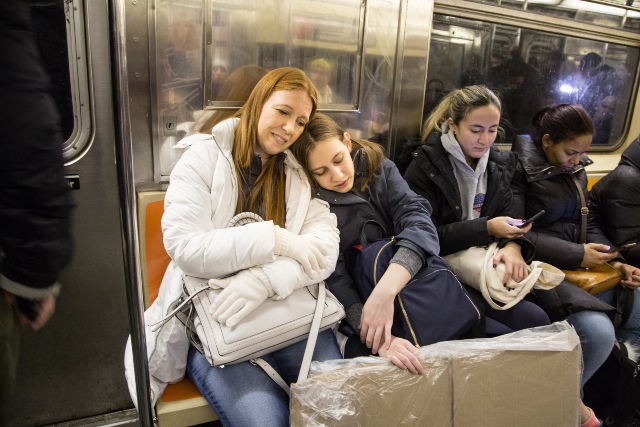 When Alexandria began her Friday strike last December—sitting on a bench, with plastic-covered protest signs, in front of the headquarters of the United Nations—she was one of the very few kids in the U.S. to take Greta’s call to action.

On protest days, Alexandria skips school and commutes from the Upper West Side to the U.N. with her mother, who leaves once they arrive. “It has to be an act without any family member because people will say my mom is pushing me into it,” Alexandria said. “I don’t want to give the climate deniers anything they can use.”

"I asked if i could sit on the bench next to her," Alexandria's mother, Kristin Hogue, said. "And she said, 'Like, no…' "

Early on, Alexandria posted photos to Instagram and tweeted to Greta’s #FridaysforFuture and #SchoolStrike4Climate movement, connecting with like-minded kids around the world who feel an urgency and frustration that leaders—adults—are not doing enough to combat the climate crisis.

“People who are older probably won’t be around to see the effects of climate change,” said 12-year-old Aya Gilad-Muth, striking outside the United Nations. “They probably are less inclined to care than us.”

“When Alexandria first decided to sit down and strike,” said Hogue. “She just thought she’d be striking.” The 13-year-old never expected that within mere weeks activists, climate researchers and environmental groups around the world would be listening to her.

Whoa @HillaryClinton!! "Perhaps soon?"
You are about 10 weeks late to #ClimateStrike in America, led entirely by us young women!
We are already here! 🌎@climatestrikeUShttps://t.co/9ZvwYZF1s0 https://t.co/SWjnO87Xv0

Nowadays, there are reportedly 70,000 students skipping school on Fridays to protest, in hundreds of cities around the world—with momentum building here in the U.S., thanks to Alexandria. Thousands of kids have already pledged to join the National Youth Climate Strike on Friday, March 15th, that she and two student activists in Minnesota and Colorado have planned. There are events set in more than 30 states, and support from major environmental groups and youth leaders.

A national conversation around climate change is gaining traction, with the Green New Deal, an ambitious piece of climate change legislation championed by Rep. Alexandria Ocasio-Cortez that calls for the U.S. to run on 100 percent renewable energy within 10 years, making waves in Congress.

Last week a group of school kids, ages 7 to 16, from the youth activist group Sunrise Movement approached Sen. Dianne Feinstein to ask for her support of the Green New Deal. After the 85-year-old California Democrat resisted, telling the students there was no hope of the legislation passing the Republican-controlled Senate, news of the confrontation went viral.

“This is only the beginning,” said Alexandria. “It’s the start of a huge movement here.”

#climate change
#UN
#united nations
#original
Do you know the scoop? Comment below or Send us a Tip