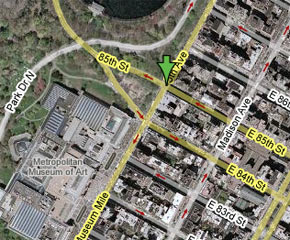 A number of people, after witnessing a cab driver clip a woman crossing Fifth Avenue yesterday morning, came to her aid as another driver chased the cab. The Post reports that the woman had been crossing Fifth at 85th Street when a cab "raced westward."

A doorman at 1040 Fifth Avenue said the cab driver "was obviously going way too fast." This is a stretch of Fifth Avenue with a lot of pedestrians and tourists - it's Museum Mile.

The cab driver did not stop after hitting the woman, and that's when another driver chased him into Central Park. From the Post:

After the driver caught up with him, [Yahia] Nassar, a cabdriver for eight years, returned to the scene and admitted his offense.

He claimed he "came back to see what happened."

Nassar was charged with leaving the scene of a crime and had his taxi license suspended. The Post also mentions his past offenses: a $100 fine for disobeying a traffic signal in 2004, a $130 fine for speeding and making an unsafe lane change in 2006, and a $40 fine for driving while using a mobile phone this year.

A street cleaner gave the woman first aid and she was later taken to New York Hospital. Her injuries were described as not being life-threatening.