Party's Over At Gowanus Batcave, But Mysterious Millionaire Will Make It "F*cking Cool"

The ultra-wealthy, fixed-gear enthusiast who's converting the Gowanus Batcave into art studios has a message for would-be trespassers: Party's over.

When Joshua Rechnitz bought the long-vacant Brooklyn Rapid Transit powerhouse for $7 million last summer he must have known that, between the collapsing roof, PCBs in the ground, and the Superfund-designated Gowanus Canal in the front yard, the place is a mess. But the cycling heir and philanthropist behind the nixed $40 million Brooklyn Heights velodrome didn't plan on his red brick acquisition serving as a fly-by-night honky-tonk.

“The site has been sealed so that it’s no longer a party space,” Rechnitz's spokeswoman Maureen Connelly said in a recent phone interview. “If you go online and search 'Gowanus Batcave,' you’ll see many photos of parties that have apparently taken place. That’s obviously not something that we’re interested in having happen.”

It's not quite at the top of the Google results, but a little digging reveals that the Batcave has been fairly active for a supposedly "abandoned" building. Last July 4th saw a show by a Pittsburgh punk band called Napalm Donut, which you can relive on Flickr, and Dan Friel of the defunct Williamsburg noise rock group Parts and Labor joined art punk darlings Unstoppable Death Machines for a midnight set just three days after the building sale went through in September.

Graffiti artist You Go Girl organized the summer shows, as well as an Aliens-themed rager last year. The Brooklyn native lived through the Batcave’s beginning as a squat and has used the building’s walls as personal ad space for the better part of a decade. According to them (the tagger’s preferred pronoun for purposes of this article), the closure is “predictable and embarrassing.” 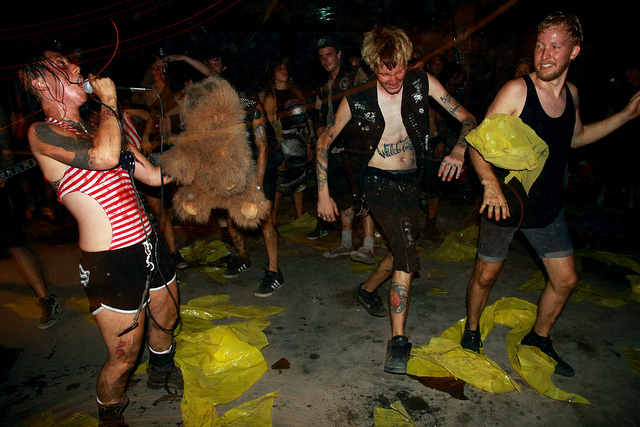 CrackBox performs in the Batcave on July 4, 2012 (Amelia Merrick)

“People in New York have no sense of privacy and discretion anymore,” they explained. “They blow everything up because they want to seem cool. I just wish people would relearn the skill of secrets in the information age.”

For all but a handful of months, since the 1990s the hulking structure has stood open to anyone willing to risk a dip in the Gowanus Canal, acting as a magnet for graffiti writers and urban decay fetishists. But according to Connelly, a crew cleared the building of tons of debris this winter, and a recent visit found sheet metal fastened over the arched windows, as well as shiny new padlocks securing all of the roll gates.

Last month, Zach Edminster stood in the moonlight outside Batcave after trying every entrance. "I suppose that it was inevitable that this place would get developed, but it's still sad they're putting so much into security. It was one of the last wild places in New York. I'm just glad they're not going to tear it down."

Now a 25-year-old pre-med student at Hunter College, Edminster was a teenage squatter the last time "exposure" meant curtains for the Batcave. 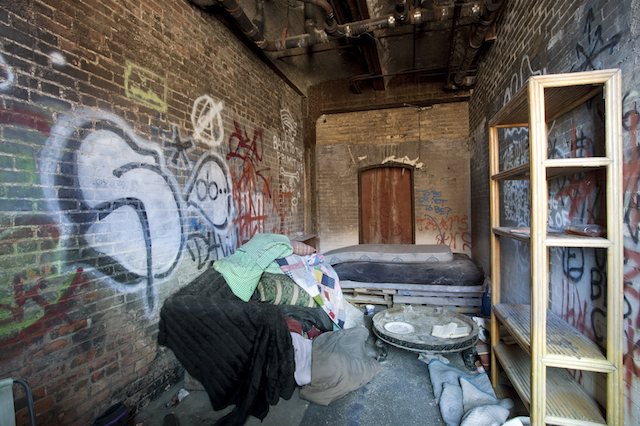 The building's secret role as a residence blared into public awareness with a 2006 Daily News article describing the squat in salacious detail as a haven for junkies eager to tell a reporter about the time they threw a guy out the window. The piece was an ugly coda to a period that, in the telling of former residents and frequent visitors, began with an earnest commune of teenage runaways, complete with a bike repair shop and a compost pile.

Edminster became the Batcave's first long-term resident when he left his mother’s Meatpacking District apartment at age 14. He was soon joined by a crew of about a dozen, most of them homeless teens, who agreed on a no hard drugs policy and set about making a living space inside the grimy former coal plant. They hauled back trash-picked furniture and building supplies on the early morning F train. By 2004, with the help of older Lower East Side squatters who’d taken an interest in the project, they had equipped their clubhouse with toilets that flushed with rainwater and a fridge and TV that ran on power jury-rigged from the nearby Carroll Street Bridge.

The Batcave reached the point of over-saturation soon after. Early residents recall returning from a winter of hitchhiking to find that all of Tompkins Square Park moved in to their house.

You Go Girl: “It was so disgusting. People left trash everywhere and pooed in all kinds of places people don't have business pooing in.”

The newspaper exposé was the last straw for the owners, a team of developers who planned to roll the Batcave and several adjacent properties into a massive canal-side condo compound called Gowanus Village. Within days of publication, they had the doors welded shut and a security guard posted. It wasn’t long, though, before the lockdown unraveled along with the development plans.

By early 2008, the building was on the market just in time for the economic collapse. As the building and brownfield lot festered unsold, music videos, an art film and spooky interior shots proliferated and the building apparently hosted an after party for a film event at the nearby Can Factory studios.

Still, despite the 2010 Superfund stamp and Sandy flooding, which left many canal-front lots caked in sewage (the Batcave was spared by its superior elevation), development has plowed ahead in the neighborhood that realtors have been calling brownstone Brooklyn’s missing link for 15 years now. 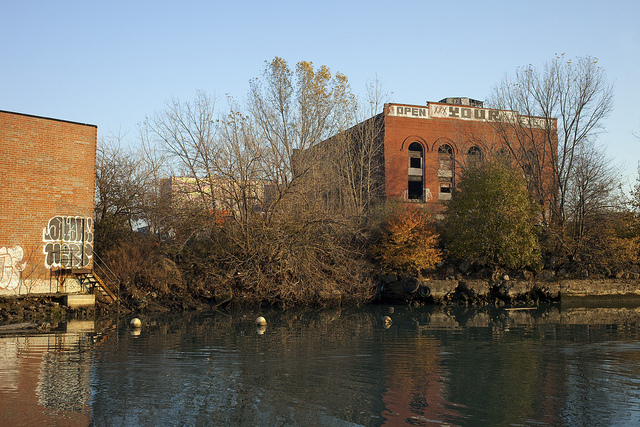 So far, details about the latest Batcave plan are scarce—Rechnitz is notoriously press shy and his business partner, sex toy sculptor Randy Polumbo, did not respond to interview requests—but Polumbo told the Times that they plan to preserve the building and have it house 50-60 studios and a gallery space. According to Connelly, nothing can happen until an environmental study is completed. One thing is clear: getting the city’s OK to allow humans inside to view and make art will require some heavy lifting.

In addition to buried coal tar and PCBs, a recent Department of Environmental Conservation study found soil vapors from PCEs, a noxious chemical most often found in dry cleaning facilities, at 10 times legal limits. An environmental assessment by the last developers put the price tag for soil remediation at $1.375 million, according to graduate research. And that's not counting the work the building itself needs.

Still, Gowanus watchers are cautiously optimistic. Among them is neighborhood activist Linda Mariano, who has railed against a slew of development proposals over the past decade. "I believe it is great news for the building and for Gowanus that an arts center will be in the area," Mariano wrote in an email.

Community Board 6 manager Craig Hammerman is supportive of the changes too. "We've seen a significant rising trend of arts and cultural uses emerging throughout the Gowanus corridor," he said. "It makes sense to continue to build on our strength."

Gowanus Ballroom owner Josh Young has worked for Polumbo and Rechnitz and expects to be involved in the Batcave renovation. A longtime member of the 6th Street squat, which was legalized by Giuliani with 11 others following the 13th Street riot, Young remembers visiting the Batcave when it was a "baby squat" and he is quick to paint the new owners as upholders of the building's renegade traditions.

"They like the handmade kind of feel," Young said. "I'm not totally sure what it's going to look like but Josh Rechnitz is too crazy and out there to do something gross and corporate. The guy's got a staircase in his house made entirely of whalebones and melted piano guts. Whatever the Batcave project ends up being, it's gonna be fucking cool." 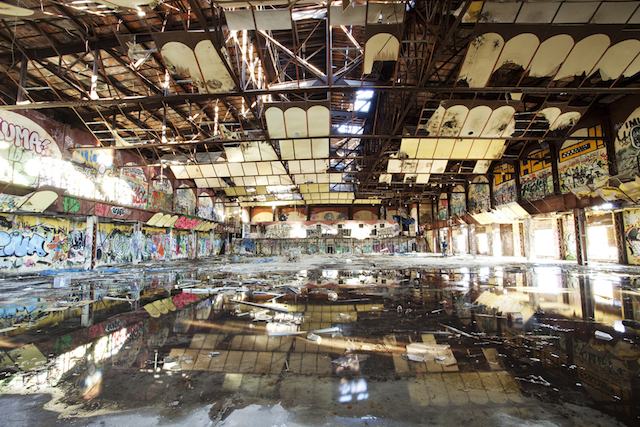 #batcave
#Gowanus
#gowanus batcave
#joshua rechnitz
#squats
#longform
#original
Do you know the scoop? Comment below or Send us a Tip