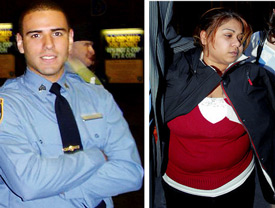 Police have arrested a bank teller for helping an NYPD rookie pull off two robberies at the East Village bank last year. Christina Dasrath admitted to cops that she received a portion of the $118,000 taken.

Police officer Christian Torres was arrested last week after robbing a Sovereign Bank in Pennsylvania of more than $100,000. It turns out Torres was tipped off by Dasrath about the East Village branch's lax security (plus security changes made after his first heist). The two may have met while attending the John Jay School of Criminal Justice.

Dasrath is being charged with bank fraud and making false statements because she told investigators she knew nothing about her bank's robberies. A source characterized Dasrath as the mastermind behind the bank jobs, but her 16-year-old brother Christopher came to his older sister's defense. "There's no way she would do something like this...Our dad is the strictest person you'd ever meet."

The NY Times revealed that after Torres' arrest, police found "a copy of his own wanted poster...and news clippings related to the Manhattan robberies" in the car. And while Torres was buying a 1.5 carat diamond ring for his fiancée with the stolen loot, Dasrath's brother told the Daily News, "The only thing she bought recently was a black Toyota for 3 Gs, and it doesn't even have a CD player."

#bank robber
#Christian Torres
#christina dasrath
#east village
#feds
#manhattan
#sovereign
Do you know the scoop? Comment below or Send us a Tip
A new Gothamist is coming! We’ve moved comments over to our beta site. Click here to join the conversation and get a preview of our new website.