Last night, part of the facade of a Chelsea building collapsed onto the sidewalk. Luckily, no one was injured but the authorities evacuated residents.

The building, the old O'Neill Department Store at 655 Sixth Avenue, was built in 1887 and was renovated into condominiums in 2007. According to MyFoxNY, "Parts of some decorative pillars, about 15 feet off the ground, crumbled off the ornate surface of the block-long building. The damage left a 4-to-5-foot-tall pile of bricks on the ground." 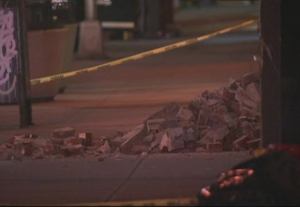 , "Part of the facade fell down and we all got evacuated from the building. We were given a few minutes to collect medication and everything we needed but I'm just a bit warm from running around and gather everything which is why I'm not wearing my coat."

There are supposedly cracks in the facade. WCBS 2 reports, "Buildings Department records show the facade was inspected in February and declared safe." Other renovation work has been taking place on the first floor of the building.

#655 sixth avenue
#Chelsea
#o'neill building
#partial facade collapse
Do you know the scoop? Comment below or Send us a Tip