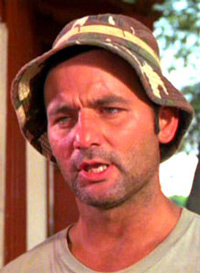 It may have looked like simple joyriding on a Friday afternoon, but the Parks Dept. employee careening around Battery Park near Whitehall St. yesterday afternoon was actually a man on a mission, i.e. to kill as many birds in the park as possible. Martin Hightower has been a Parks Dept. employee since 2005, but was arrested after 911 started receiving calls about a man driving recklessly on a golf cart at the southern tip of Manhattan.

Hightower narrowly missed several pedestrians in the park, but did succeed in killing three pigeons and two seagulls before he was pulled over(?) by police. Unsurprisingly, someone was on the scene at the park, where tourists congregate to catch the ferry to see the Statue of Liberty, with a video camera. Police reviewed the tape and saw that Hightower was clearly trying to run over a number of birds. He could face a year in jail on animal cruelty charges for each bird he killed.

Parks Commissioner Adrian Benepe told The New York Times that he couldn't recall anything like an avian Death Race 2000 occurring before, although they did catch a Parks employee scalding monkeys several (25) years ago. The Parks Dept. isn't necessarily a limitless fan of birds in city parks, but it generally attempts to employ more humane ways of scaring them off--like the border collies hired to chase off Canada Geese from Central Park.