[UPDATE BELOW] Dueling articles in the local tabloids today paint two very different pictures of McCarren Park Pool, which has been the site of recurring violence and theft since it reopened to great fanfare last month. The Post, citing unnamed "authorities" and NYC Parks advocate Geoffrey Croft, reports that the high-profile pool is on pace "to exceed all other city pools combined in arrests this summer." Meanwhile, a Daily News editorial claims that "hysteria about supposed disorder is based on misinformation." And both publications have different stats on arrests and theft at the pool. What is going on here?

The Post, citing "authorities," counts "eight arrests — including separate incidents in which a cop, a lifeguard and a 13-year-old girl were assaulted" at McCarren Park pool. The Parks Department ignored repeated inquiries from the Post, but according to Croft's count, there have been a total of seven arrests at all other park pools. Meanwhile, the News reports that there have been 20 total arrests at all city pools so far, "including four at Brooklyn’s Betsy Head Pool and six stemming from the two incidents at McCarren July 2 and 17." So that's just six arrests at McCarren and 14 arrests at other pools, according to the News' source. And who might that source be? 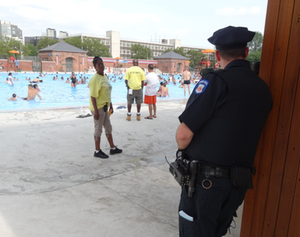 "We knew from a source that the Parks Department was cooperating with the Daily News on a shall we say less-than-critical piece," Croft tells us. "The fact that one newspaper was repeatedly refused basic public safety information from the Parks Department's press office while they handed over information to another paper speaks volumes. It is abhorrent that the agency would be allowed to deny providing data despite numerous requests. Someone needs to be held accountable for this including the Mayor who should be ashamed."

We have also requested information from the Parks Department on the pool numbers, and have not heard back. Croft adds, "I'm glad the News editorial covered this important issue, however the piece contained a few factual inaccuracies I wish would have been fact checked before being published. The Parks Department is famous for desperately trying to spin the facts." UPDATE: In response to our request for information about pool crime, Parks Department spokesperson Vickie Karp replied, "Mr. Croft has an obligation to you and the public to justify his numbers and their source. He doesn't answer me when I question him, and I really have to question his objectivity because of this." 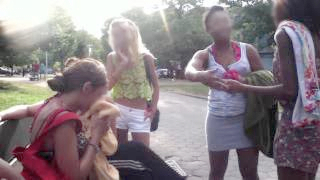 A teenage girl, seen here holding a towel to her bloody face, needed surgery to repair her broken nose after a group of bullies followed her and her friends out of McCarren Park Pool.

For example: According to the News, "The image of an out-of-control McCarren is based largely on two incidents since the start of swimming season, 28 days during which more than 76,000 bathers took advantage of the facility." Croft counters, "There were four incidents: the first incident was the violent attack on the lifeguard, which didn't result in an arrest, but it's still a violent incident. Then there are the two girls who were assaulted after swimming in the pool." We suspect the News did not count that incident because it occurred in the park after the teens had left the pool, but Croft says, "It's a pool incident, it started in the pool. If that pool wasn't there, those girls would not have been punched in the face."

The News editorial goes on to say there "have been 22 locker break-ins, with a high of five at Van Cortlandt Pool in the Bronx, two at McCarren and, again, zero at most pools." Croft believes that locker break-in number is severely understated: "There was a locker burglary yesterday at McCarren Park Pool yesterday, and there have been ten at the pool just when I've physically been on the premises. And I know there have been probably close to two dozen locker burglaries. I don't know where they got two. The locker incidents were so bad there that they have a dedicated NYPD officer posted in the locker rooms." 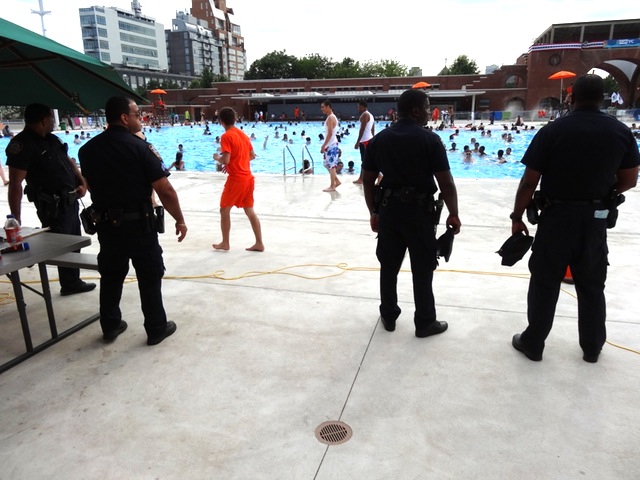 The idea that crime at McCarren Park Pool has been overhyped by the media was the first question City Council Speaker Christine Quinn asked last week when she attended an under-the-radar meeting at the pool to discuss security. According to A Walk in the Park, an NYPD representative on hand said they're taking these incidents very seriously telling Quinn, "These are actually very serious people that are doing these infractions. These are criminals these aren't just innocent teenagers caught up in the wrong place at the wrong time." Next summer, it's quite possible visitors to the pool may be required to sign up for a registration card or I.D.

#brooklyn
#greenpoint
#McCarren Park Pool
#parks
#pools
#williamsburg
Do you know the scoop? Comment below or Send us a Tip