Parking Tickets in NYC by Precinct 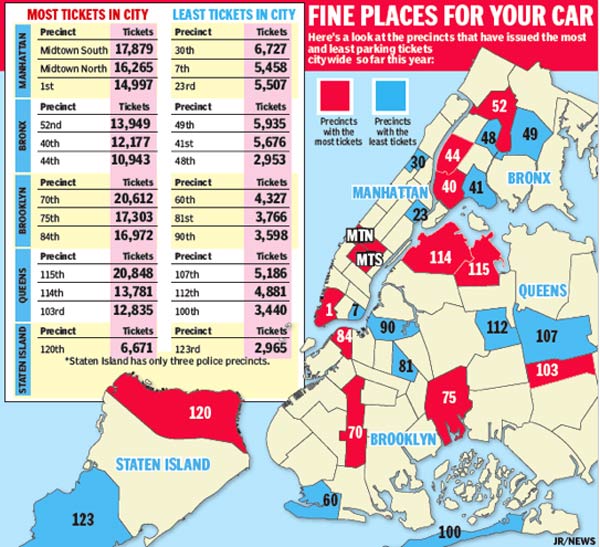 Graphic from the Daily News

All NYPD precincts do not ticket equally; and a graphic in the Daily News displays where drivers are most and least likely to receive a parking ticket in New York City. It's not indicated why, but the total number of tickets issued by parking agents, 672,149, is down 13% from last year. The City hopes to remedy this with the recent addition of 200 more parking agents.

The crunched numbers show that the 115th Precinct in Jackson Heights, Queens is the home of the busiest ticket scribblers, writing 20,848 tickets. Just a few hundred behind the 115th was Brooklyn's 70th, with 20,612. The most lenient precinct was the 120th at the far south end of Staten Island; it's only issued 2,965 tickets this year.

The News quotes several people from Jackson Heights, from doctors to delivery drivers, with the standard horror stories of multiple tickets in a day and agents standing next to their cars to issue a ticket one second after their time is up, as an owner is rushing to put more money in the meter. That may sound draconian, but at least it's not as bad as traffic agents issuing outright bogus tickets, even when parked legally. What can one do to fight that? One New Yorker spent an estimated two years and $10,000 to beat a $65 parking ticket.

#brooklyn
#jackson heights
#parking tickets
#precincts
#queens
Do you know the scoop? Comment below or Send us a Tip