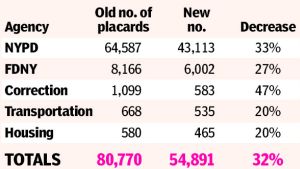 The 144,160 parking placards registered in the city inventory have been reduced by over 25,000, Deputy Mayor Edward Skyler announced yesterday. The cutbacks are targeted at what many frustrated drivers see as an abuse of a system that lets police, teachers and civil servants park for free at meters and many off-limits areas. Initial cuts have focused on the 80,770 placards issued to 68 city agencies, exempting the 63,390 placards used by the Education Department.

The 32% slash beats Bloomberg’s initial pledge to cut them by 20%. NYPD employees saw their placards – which let them park their personal cars near the precinct houses – cut most severely, from 64,587 to 43,113. Ironically, the Police Department will now be the ones issuing the placards; in the past each city agency got to dole out their own. Now the DOT will be the only other agency with that authority.

More reductions are to come once the school year starts and the 63,390 Education Department placards are reduced. Paul Steely White, of Transportation Alternatives, sees this as “a good first step. But the final analysis will be weeks and months from now, when we see how actively these plaques are enforced.” Skyler insists that vehicles with expired permits or those issued without authority will now be ticketed. "You might as well have Time magazine on your windshield. It'll be just as effective." Beware, Park East synagogue employees!