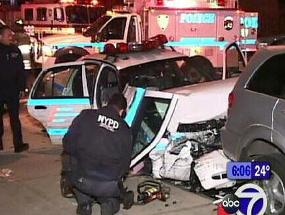 The Gothamist Newsmapindicated a "Police Car MVA W/ entrapment" occurred at Miller & Bellmont Avenues in Brooklyn at 2:49AM this morning. It turns out that it wasn't just a police cruiser - it was a cruiser, a driver trying to flee a traffic stop and fifteen parked cars.

According to WABC 7, driver Albert Caban had allegedly refused to pull over when the police stopped him for driving without his headlights. When he tried to escape, he "lost control, smashing into 13 parked cars," which left an oil slick over which the police cruiser lost control, hitting another car (number 14) and Caban's car, which hit yet another car (15).

Residents woke up to the noise of cars crashing and went outside to find some of their own cars' parts in the street. Caban was arrested for DWI and marijuana possession, while the two police officers and a civilian in the cruiser (she was in the ride along program) were taken to the hospital.