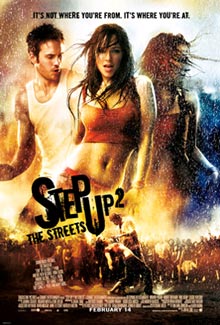 Another slice of Park Slope life from Only the Blog Knows Brooklyn. Upon leaving a showing of Definitely, Maybe at the Park Slope movie theater, the Pavilion, OTBKB and fellow moviegoers spied a white teenaged girl "sitting on a bench [in the second floor concession area] icing an injury on her face just below her right eye."

Then downstairs, OTBKB saw "a Hispanic woman" - who had three children with her - "wearing hand-cuffs" taken into a police car.

A crowd of people outside were trying to figure out which movie they'd been to.

Probably "Step U 2 The Streets," someone else said.

It was determined that the assault occurred during the 7:05 screening of "Step Up 2 The Streets."

What is still unclear is what precipitated the assault. But emotions run high in theaters, perhaps because some people believe theaters should be a respite while others believe it's time to talk. Recently, a federal jury threw out a civil claims case where a Utah woman's claimed she was permanently injured by an off-duty deputy after a showing of Troy. Apparently the woman and her boyfriend had been talking during the previews, prompting the deputy to yell at them; another confrontation took place after the movie. And avoiding the wrath of other moviegoers is probably why daytime movie showings specifically for parents and their babies have emerged.

Have you witnessed a fight at a movie theater recently? Besides the people who talk during movies being a natural target of hatred, aggressive people who arrive late to popular movies yet still expect to find good seats always seem to be on the brink of picking a fight. And here are some ideas about movie theater etiquette.