Designs for a newly renovated Pavilion theater and adjoining five-story condo complex were met with sharp criticism from Windsor Terrace and Park Slope residents, who say its overly modern look will be out of place with the rest of historic Bartel-Pritchard Square.

Representatives from Hidrock Realty and Morris Adjmi Architects presented the designs before a packed room at last night's Community Board 6 landmarks land use committee meeting, though two hours of debating minor home additions in the historic district did little to dampen attendees' zeal for criticism when Hidrock finally presented around 9 p.m.

"You've got architectural design that looks like the penitentiary that's down in Sunset Park," one audience member quipped. "This seems to be a very conformed, very futuristic look for that building."

Built in 1928, the art-deco Pavilion is part of Park Slope's historic district, which in 2012 expanded to include around 600 buildings between 7th and 15th streets between 7th and 8th avenues. Though its landmarked status means any exterior changes must be relatively subtle, Hidrock plans to turn the adjoining building into a five-story, 24-unit condo complex, with 16 spaces of underground parking. The ground floor will remain a movie theater, though it will also include a residential lobby. (The brick building next door, formerly Circles restaurant, is considered "non-contributing" to the historic district, and can therefore be demolished.) 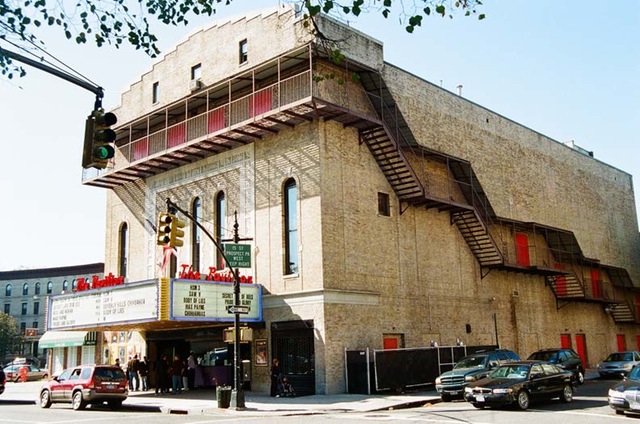 Ward Dennis, a preservation consultant speaking on behalf of Hidrock, said changes to the theater would be minor, with significant alterations to be made only to the marquee, as well as enlarged windows. He also maintained that the new glass, steel and limestone complex would be in keeping with the surrounding architecture.

Others at the meeting disagreed, arguing that the "metallic" new structure will look like it was unloaded on the Square from outer space:

"[The development] seems to have been dumped into the neighborhood...it is so out of character I am embarrassed to be sitting here."

"I hope... that is preliminary and won't look so much like Lord & Taylor's poor cousin" -self-described Park Slope resident and walker.

Peter Bray, chairman of the Park Slope Civic Council, said that while he appreciated several aspects of the project, he would like to see future drafts of the design align better with Bartel-Pritchard, which he referred to as a "formal portal" into the neighborhood. "15th Street is the door, and the buildings that surround it on the square are the door frame," he said. "And I think that the issue with this building is, it doesn't uphold its side of this portal."

In addition to masonry that doesn't match the surrounding architecture and an out-of-proportion window design, he also criticized the proposed building's lack of a pronounced cornice, to wild applause.

"I'm not asking the architects to design a total replication of the 19th century building, but I think they could do a lot better to bring in elements that make it part of an ensemble cast, and not kind of stand out or grab your attention on the circle," he concluded.

On the other hand, Councilman Brad Lander pointed out that residents should be grateful that Hidrock is allowing the theater to remain a theater, when a soulless retail chain would certainly net a much tidier profit.

"[In April] the intention at the time was to have retail on that ground floor, which could be a Subway or a Dunkin Donuts or the Gap or just about anything," he said. "And sadly, that would be perfectly allowable under the Landmarks Preservation rules, and there would be not thing one the community could do about it."

Lander's office petitioned particularly hard to save the theater, though he also acknowledged that its current incarnation is somewhat terribly managed. He said he envisions the future Pavilion as a sort of art-house cinema, something that could easily be found in Williamsburg.

"The loss of the theater and, in particular, its replacement with likely hideous retail would be just a really tragic loss in the neighborhood," he said. "The preserving of the theater—hopefully it will be nicer than the current one, which has been there for more than 100 years, is a really important act of preservation." (Anything would be better than the Pavilion's dark days of 2011... or 2015.)

The board voted unanimously to provisionally approve the plan, pending several recommendations by the board that would more seamlessly integrate the building into the neighborhood.

#landmarks preservation committee
#park slope
#pavilion theater
#windsor terrace
#original
Do you know the scoop? Comment below or Send us a Tip