When Mayor Bill de Blasio announced his plan to build 90 new homeless shelters across the city, critics pointed out that wealthier neighborhoods like Park Slope, where the mayor lived with his family before moving to Gracie Mansion, haven’t gotten their fair share of shelters compared with lower income areas like nearby Crown Heights. Now the city is starting to deliver on its promise to distribute beds more equitably. Two buildings being constructed on Fourth Avenue in Park Slope are slated to become shelters for a combined 253 families with children.

Initially, the buildings at 535 Fourth Avenue and 555 Fourth Avenue were to become commercial and mixed-use buildings, respectively. At a community meeting on Wednesday night, Park Slope residents were split on whether they would be wary or welcoming of their new neighbors.

But those on both sides of the familiar NIMBY debate expressed misgivings about the city supporting the developers of the buildings that will be converted into shelters, which would have otherwise joined a slew of new midrise luxury buildings going up on Fourth Avenue. According to the Times, one of the developers, Adam America Real Estate, also has several other projects on the corridor.

“How much is the city paying for those units?” asked Bo Samajopoulos, a retiree who said he has lived in Park Slope for more than 50 years. “Fourth Avenue is oversaturated with a cesspool of luxury condominiums...These people wouldn’t be homeless if Brad Lander and Bill de Blasio had kept their promise and made sure that all of those buildings were affordable to begin with.”

Jackie Bray, first deputy commissioner at the city’s Department of Homeless Services, said the city will pay market rate for the shelter units, which she said is necessary in order to distribute shelter beds more equitably.

“In previous administrations, most of the shelters were concentrated in East New York, Brownsville, Hunts Point and the South Bronx,” said Bray. “And they were concentrated there because the city said, ‘We’re not willing to pay higher rents for shelters.’ What that meant was deep inequity in the way we sited shelters.”

Bray did not share figures on what the city would be paying to rent each unit.

Attendees noted that the buildings have incurred a slew of safety violations from the Department of Buildings while under construction, leading some to mistrust Adam America Real Estate and the other developer, Slate Property Group. In 2016, a strong wind knocked part of the roof off 535.

Bray assured the audience that the buildings will undergo comprehensive safety assessments before opening to shelter residents. 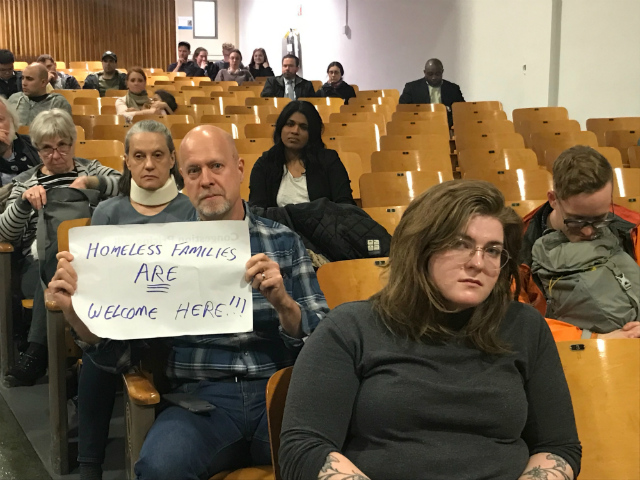 The new shelters are part of the mayor’s plan to reduce the city’s homeless population by 2,500 between 2017 and 2022. The plan involves shuttering all cluster-site and hotel housing in favor of shelters for specific populations with dedicated social services.

However, a report released by Coalition for the Homeless this week says the plan has yet to make a dent—homelessness reached a new all-time high in January of this year, with 63,839 New Yorkers sleeping in shelters each night. The report called the mayor’s goal of reducing the roughly 60,000-strong homeless population by only about 4 percent an “embarrassingly unambitious objective given the enormity of the crisis.” And it predicted that the city wouldn’t even meet its goal; given the current trajectory, the number of people experiencing homelessness on a given night will increase by 5,000 by 2022, the nonprofit projected.

“What assurances do we have that as we’re introducing new families into this district, there are going to be deeply affordable options for them to stay in this district?” asked Zac Martin, a Park Slope resident and pastor at Recovery House of Worship, which serves many people experiencing homeless. “Not [units at] 40 percent [of the area median income], but 10 percent, 20 percent, 30 percent AMI?”

In response to residents calling for more permanent affordable housing rather than shelters, City Councilman Brad Lander, who represents Park Slope and other parts of Brooklyn, said they should get involved in discussions about planned rezoning in neighboring Gowanus.

The shelters, which will be run by the nonprofit Women in Need NYC, are coming to the neighborhood regardless of residents’ concerns (which also spanned the typical range of fears about safety and doubts about new children attending local schools). They are slated to open this fall.

Caroline Lewis is on the health care beat for WNYC and Gothamist — and also covers cannabis, both with an eye towards equity and accountability. She was previously a health care reporter for Crain’s New York Business. Lewis has a degree from the CUNY Graduate School of Journalism and is a native New Yorker, although she has left occasionally. She did a Fulbright in Chile in 2011 and is fluent in Spanish. She now resides in Brooklyn.