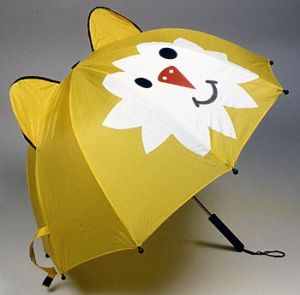 Starting next Tuesday, Park Slope shoppers will be entitled to one of 400 free umbrellas made available at a number of neighborhood stores. Yes, you heard right. FREE. UMBRELLAS. And they’re just the most adorable shade of yellow! But what’s the catch, you say? Well, each one is emblazoned with this message: "Please enjoy this community umbrella and return it to a participating local merchant."

The Park Slope Civic Council pooled $2,000 and bought the umbrellas for customers caught by surprise during a sudden downpour. When the storm ends, and the Connors and Dylans of the neighborhood return outside to play, the consumer is expected to return the umbrella to any of the participating shops. The idea is that, at least on the sugarplum streets and shady gumdrop gardens of Park Slope, the noble side of human nature will triumph over dark, umbrella avarice.

The Daily News gets a good woman-on-the-street perspective from Jannea Bandura, 25, of Morningside Heights: “Where I live, people would not bring it back. They may sell it on the streets or keep it for themselves.” The handouts are expected to go fast, so entrepreneurs should get out there early; Park Slope is easily accessible by the F, N, R, Q, B, D, 2, 4, 5, and Q trains. Or just check Craigslist after the next storm. (The pictured umbrella is not one offered by Park Slope merchants but it's much easier on the eyes.)

#community
#craigslist
#daily news
#get out
#heights
#morningside heights
#news
#park slope
#parkslope
#people
#umbrella
#Where I
Do you know the scoop? Comment below or Send us a Tip
A new Gothamist is coming! We’ve moved comments over to our beta site. Click here to join the conversation and get a preview of our new website.