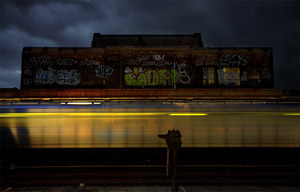 Some Park Slope activists have so little faith in the MTA's promise to renovate the dreary Fourth Avenue and Ninth Street station that they're imploring transit officials to scale back their plans and instead make a few specific improvements immediately. The massive refurbishment was supposed to begin this year and turn the "dank and dark" station into a light-filled hub with clean windows and a new copper roof. But the plans were later scaled back and postponed in the shadow of looming budget shortfalls.

The MTA now says the most urgent repair won't begin until 2010, to be completed in 2012. The more cosmetic improvements, like the long-overdue coat of paint and window repairs might not be done until 2014. Michael Cairl of the Park Slope Civic Council isn't holding his breath; he tells the Brooklyn Paper, "It’s become clearer that NYC Transit is not going to do a rehab of the Fourth Avenue station." Cairl's group wants the MTA to think smaller by implementing a few basic changes now, like reopening a long-shuttered entrance on the eastern side of Fourth Ave. (Park Slope commuters have to cross five lanes of perilous traffic to get to the F train.)

Cairl also says the MTA should put in a newsstand or cafe, which "would be a way for the MTA to make some money," he suggests to the Daily News. But New York City Transit spokesman Charles Seaton says they're sticking with their plan, and everyone can just forget about opening up that other subway entrance: "That’s something that we’re not contemplating at this point. The point is that [the project] is fully designed, and so making any changes in the new entrance is a major change."

#4th
#9th
#ave
#avenue
#delay
#f
#group
#MTA
#overhaul
#park slope civic council
#platform
#rebuilt
#renovation
#smith
#st
#street
#subway
#train
#work
Do you know the scoop? Comment below or Send us a Tip
A new Gothamist is coming! We’ve moved comments over to our beta site. Click here to join the conversation and get a preview of our new website.