More than a hundred parents, teachers and students gathered on the steps of Department of Education headquarters on Chambers Street Wednesday to accuse the DOE of violating student and teacher rights in an escalating investigation into longtime Park Slope Collegiate Principal Jill Bloomberg.

Bloomberg, a vocal critic of school segregation, is under Department of Investigation scrutiny for alleged communist organizing, according to a lawsuit she filed earlier this spring. Her supporters held signs that read "Integrate, don't red bait!" and "Fariña = McCarthy," likening DOE Chancellor Carmen Fariña to the former US Senator who destroyed numerous careers with a demagogic communist witch hunt in the 1950s.

"I believe that this has all of the elements of retaliation," said Miriam Nunberg, a parent of two. "The fact that it came so soon after Jill and the parents started raising issues around sports equity seemed to be a bit too coincidental."

Park Slope Collegiate is majority black and Latino, and since 2010 has shared a building with Millennium Brooklyn High School, which is about one-third white. School investigators first approached Bloomberg in March, soon after she criticized the DOE for offering a more robust sports program to Millennium. In the past, she's protested the installation of metal detectors in her school and organized assemblies about police brutality. "I do think the recent sports demands really kind of kicked the hornets nest," she told Gothamist on Wednesday.

students teachers and parents from #JohnJay school in Park Slope where DOE is investigating principal accused of communist Organizing pic.twitter.com/3F9Udyorus

According to the DOE, the investigation isn't related to Bloomberg's politics or activism. Instead, Bloomberg may have violated a policy against political organizing during school hours. The DOE sent a memorandum to Bloomberg's lawyers this spring, stating that she and two other teachers are under investigation for allegedly recruiting students to the Progressive Labor Party, and inviting them to marches. It also alleges that Bloomberg's husband filmed a documentary for the left-leaning Len Ragizin Foundation that featured students and staff "without their authorization," and that Bloomberg charged entry to a screening of the film.

Bloomberg denies the recruitment allegations, as well as any affiliation with PLP. According to her attorneys, the campus film screening was permitted by the DOE, with an optional donation at the door. As for the filming, "she advised the filmmaker of obligation to have releases," said attorney Maria Chickedantz.

Bloomberg's lawsuit accuses the DOE of investigating her "in retaliation for her advocacy," and violating her right to free speech under the First Amendment. It also alleges that the DOE has misinterpreted Chancellor's regulation D-130, which prohibits campaigning on school property, or during school hours. "We are saying that D-130 only applies to electioneering and partisan politics," said Chickedantz. "Even if she were a member of the party and she were inviting people to marches, that wouldn't be a violation. The PLP isn't a ballot party."

Bloomberg also defends her right to encourage activism in school. "Now we are told, 'If you lead children in the fight against racism, the Department of Education will investigate you,'" she said. 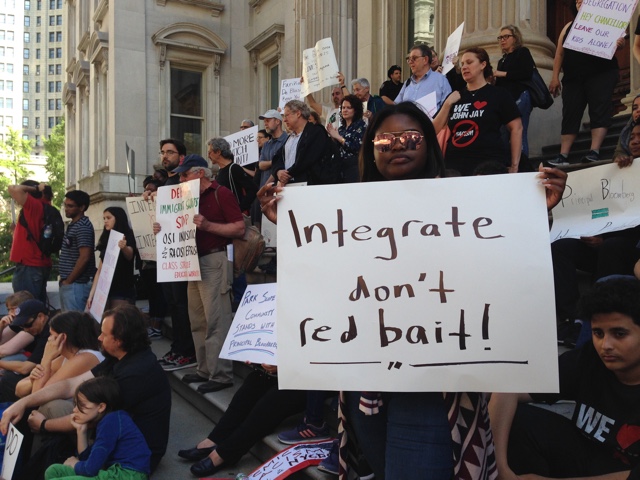 Some parents at Wednesday's rally likened Bloomberg to David Garcia-Rosen, a former dean at International Community High School in the South Bronx who was removed from his school after organizing a series of budget hearing disruptions demanding more funding for sports in small schools with minority populations.

Bloomberg has not been removed from school, though her supporters say recent escalations in the investigation are alarming. This month, school staff and DOI investigators allegedly questioned seven Park Slope Collegiate students, all young women of color active in the school community, on a range of topics including their political beliefs, and those of their parents and teachers.

"When the guidance counselor pulled me out of class and brought me into the office I was terrified," said 8th grader Alex Stevens. "They asked me questions about my parents, their political beliefs, and their activities, along with other questions that were irrelevant to the school. I felt that they put me in a position where they were pressuring me."

"I got asked about my economics teacher, about if he was a part of the Progressive Labor Party, if I was part of it, if I ever was part of it," added PSC senior Kastia Colon. "We do rallies for Black Lives Matter, and most of the papers they had [in the room] were just that. And that has nothing to do with communists."

The DOE did not immediately comment on the student interview allegations.

Chickedantz, Bloomberg's attorney, said Wednesday that while Bloomberg is not a member of the PLP, the fact that she felt compelled to state this on the record is alarming from a free-speech perspective, as well as an educational perspective.

"We started off not bowing to the level of having to deny, because what is the message for other people who might be [communists]?" she said. "We didn't want to play into the red-baiting."

[Update 11:30 a.m.]: A DOE spokesperson stated that, "The DOE’s current investigation into allegations of misconduct are unrelated to Ms. Bloomberg’s recent concerns regarding the John Jay Campus.” He added that student interviews are allowed as long as a guidance counselor is present, and that students have the right to decline to answer questions.

#communism
#Jill Bloomberg
#Park Slope Collegiate
#Red baiting
#segregation
#original
Do you know the scoop? Comment below or Send us a Tip