Bike lanes make streets safer for cyclists, but they come at a cost: sometimes they replace the free parking spaces that NYC drivers seem to feel is their God-given birthright. Over in Park Slope, the never-ending quest for parking space is legendary, so we were not surprised to see that one local motorist is determined to hold onto this hallowed ground for life and hand it down to future generations, as if squatter's rights applied to public streets.

Adam White, a lawyer who happens to represent injured cyclists, spotted this embattled Subaru at 359 Ninth Street in Park Slope on Sunday, while on his way to the gym. In addition to lodging a total of three 311 complaints, White tweeted a photo of the offending Forester, highlighting its owner's "amazing" assumption: That "his right to park in the bike lane was grandfathered to him." (We don't yet know the gender of the car's owner.)

This guy thinks his right to park in the bike lane was grandfathered to him. Amazing! pic.twitter.com/lJpjSMSNWF

Having trouble reading the piece of paper taped to the back windshield? Let's lean in for a closer look. 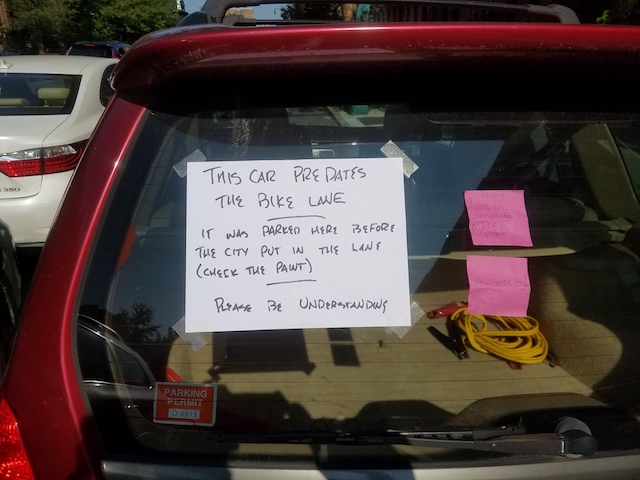 The hand-written sign reads: "This car predates the bike lane. It was parked here before the city put in the lane (check the paint). Please be understanding." Apparently, if you grab a patch of municipal pavement and sit there long enough, it becomes yours—city ordinances be damned. As one Twitter user pointed out, the paint does stop under the car, suggesting the DOT crew had to maneuver around the vehicle.

Streetsblog reports that this bike lane is new—apparently part of a redesign intended to improve safety at a notoriously dangerous intersection.

To be clear, it is illegal for a motorist to stop, stand, or park their car in a bike lane, and cars that block bike lanes can cause casualties—sometimes even fatalities—when they force law-abiding cyclists to swerve unexpectedly into traffic. White says he saw a $115 ticket clipped under the rogue Sub's windshield wiper, and although he called 311 again, he was told that the police had responded and deemed no further action necessary. 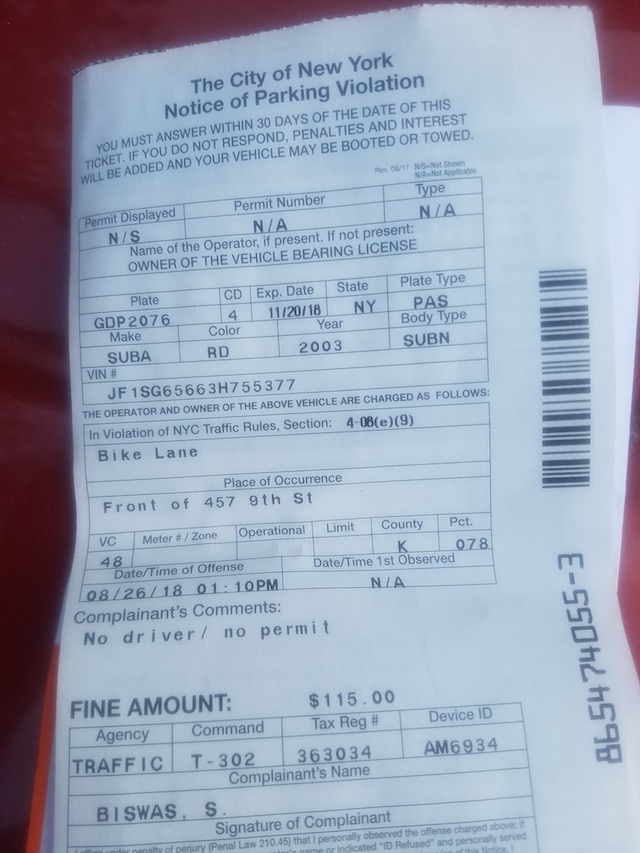 Streetsblog reported a similar experience. The car—whose owner is no stranger to parking violations—has accrued another $115 fine as of Monday afternoon, but apparently, the NYPD declined to tow it until Friday, when street cleaning forces car owners to relocate their vehicles. This refusal may have something to do with the fact that "tow trucks tend to be quite wide, [and] it's a narrow lane," White says. "But at a minimum, they should be ticketing the hell out of that thing. They should ticket it every day at least."

To White, the addition of a note imparted a whiff of "fuck you" to the gesture, which poses a public safety hazard because it obligates bikes to either stray onto the sidewalk or into the street. Unmasking the culprit has become something of "a little Park Slope mystery," he says. "Who is this person and who put this note on here? Is it someone who's just another one of these irate car [owners]: 'They're taking my parking spaces away, I'm going to show them!'"

#bike lane
#bike lanes
#bike nyc
#irate motorists
Do you know the scoop? Comment below or Send us a Tip