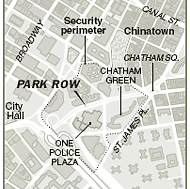 It's been six years since the 9/11 terrorist attacks, and Chinatown residents are getting frustrated that a security measure to protect New York City's police headquarters has tied traffic in their neighborhood in knots. One Police Plaza is located on Park Row in Chinatown, a street that links the financial district with one of the oldest ethnic neighborhoods in the city.

Park Row has historically been a major four-lane artery linking the financial district to Chinatown. It begins at Broadway by City Hall Park, zigzags under the Brooklyn Bridge, hugs the length of the New York Police Department’s headquarters and ends at Chatham Square.

The roadway has been closed to regular vehicle traffic since 2001; the NYPD asserts that it's necessary to protect its HQ from a truck bomb attack. Chinatown residents are increasingly frustrated, however, at the disruption caused by the closure of a vital thoroughfare. People who live nearby argue that the police department has placed a chokehold on an entire neighborhood and that if One Police Plaza is such an obvious terrorist target, perhaps it should be moved from a residential area. One middle school teacher said "I’m only let into my building at the whim of a cop."

The NYPD is taking measures to mitigate the disruption to the neighborhood that it feels is necessary to protect its facilities. Security booths are being aesthetically upgraded and pedestrian walkways are in the planning for Park Row, although some residents feel that these are simply steps to make the street's closure more permanent. In March 2005, the city council passed and Mayor Bloomberg signed legislation that opened an 18-month period of public comment to residents about the future of Park Row.